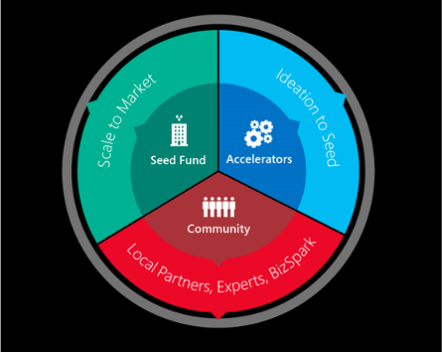 Microsoft has moved to consolidate its support of start-ups around the world by creating Microsoft Ventures, a coordinated effort that aims to offer tools, mentorship, guidance and seed funding.

“By unifying our various efforts, we will give entrepreneurs a single point of entry to engage with Microsoft,” the global software giant says on its blog.

Community will enable people to explore how to turn an idea into a business through Microsoft’s BizSpark program, which provides access to tools and resources, and partnerships with accelerators around the world.

Once entrepreneurs realise the business potential of their idea they can apply to enter 3-6 month accelerator programs with Microsoft in Bangalore, Beijing, Paris, Seattle and Tel-Aviv. Microsoft says it plans to expand its accelerators to Berlin, Moscow and Rio de Janeiro.

“At a minimum, applying companies must have a full-time founding team, a bold vision for tackling a real problem, technologically driven solutions and less than $1 million raised,” Microsoft says.

The company says it is also adding more funding to its seed investment fund, Bing Fund, to provide more support to start-ups.

Microsoft says that since 2008 more than 75,000 start-ups from more than 100 countries have received access to tools and resources through BizSpark and seen 114 start-ups graduate from its accelerator programs since they were launched two years ago.