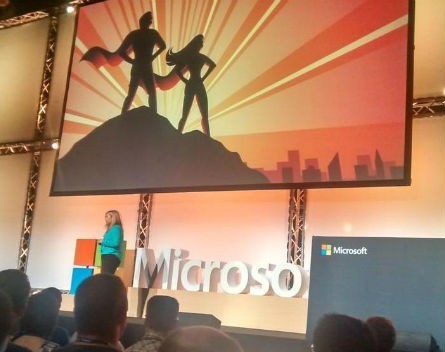 The announcement was delivered at Sydney’s Hordern Pavilion by Microsoft Australia managing director Pip Marlow. It marks part of a major push into the Australian government, businesses, independent software vendors (or ISVs) and startup market by the company.

The launch sees two data centres or “Azure Geos” go live in Australia, with one each located in Melbourne and Sydney, which are now available to all Australian Azure customers.

The local cloud computing regions mean local Azure accounts will be hosted in a data centre within Australia, in turn allowing businesses to be able to assure customers their key data will never leave Australia.

Each data centre building is roughly the same size as a rugby field and can hold two jumbo jets or 600,000 servers. In turn, both locations are large enough to allow 16 data centres to be built next to each other.

In addition to local data centres, Microsoft announced it would allow businesses to get a dedicated fibre-optic link to an Azure data centre through either Equinix and Telstra through its ExpressRoute service.

“Today is a historic day, a monumental day, because it’s the first day Australian customers can log on and choose the Azure Australian Geo,” Marlow said.

“The data centre is up and running in Australia for the first time.”

“The time and the tools are here and now to concentrate on what it is you do everyday.”

Guthrie said a key differentiating feature of Azure compared to other services is its large size (or “hyper-scale”) including the ability to scale-up services based on demand. It also includes enterprise grade support, as well as hybrid cloud support, meaning on-premises servers can connect any on-premises server to the cloud.

“We plan to differentiate from the other two based on our level of enterprise support,” Guthrie says.

“Going forward, we believe all our customers will need to take advantage of this hyper-scale activity and that elastic capability to save costs.”

Guthrie also highlighted the recently launched Azure Marketplace, similar to a smartphone app store, allows a range of both Linux and Windows server images to be installed on virtual machines at the click of a mouse button, along with higher-level cloud-based services.

One company mentioned during the keynote speech was event management software developer Centium Software, a Brisbane-based company with 70 staff that helped organise the London Olympic Games.

Centium chief executive Trevor Gardiner told StartupSmart it will help his Brisbane-based company of less than 70 staff to scale up for major events.

“Historically, the world event space has been difficult for us because of the infrastructure involved with that, and customers being unwilling to pay for that scale in the early days.

“What Azure is doing for us is that it’s allowing us to say to our customers that you don’t need to pay for a lot of expensive infrastructure in the early days, you can scale up and have that data locally.”