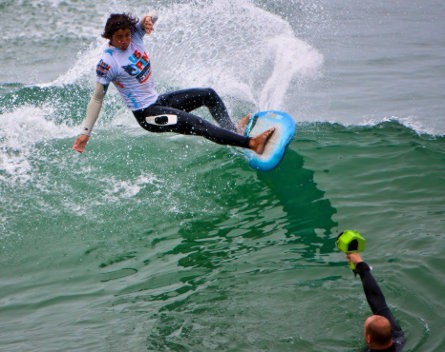 A Sunshine Coast start-up has navigated the decline in Australian manufacturing and is readying itself to help get surfers suffering injuries back on the waves.

Chris Preston started designing his surfboard seven years ago after he damaged the rotator cuff in a shoulder. Unable to paddle fast enough to catch waves, he designed a motorised surfboard.

“You surf it like a normal surfboard. I designed it with the button near where your front foot goes. You can lie on the button, or get it with your foot to make it accelerate. You can surf the board with the motor on or off,” he says.

Preston is confident the market for motorised boards will keep growing as the population ages. The target market is surfers who have damaged their shoulders, a common injury for long-term surfers.

“I’ve had guys tell me they’re going to get another 10 years of surfing because of this,” Preston says.

Another motorised surfboard style product was released by WaveJet in May 2012. Despite the competition, Preston and his co-director, wife Natalie, are committed to launching as a small business, called Power Boards.

“We’re a small company and we’re on our own. We haven’t had anyone come in and put any money into it. We’ve had a few offers and they wanted to take over so we’re just going to grow as a small company.”

The major hurdle for the Prestons has been finding a way to manufacture small runs of high quality product.

“We’ve spent the last few years trying to get manufacturing sorted. In the end, we brought it back to in-house because we couldn’t get a quality product,” Preston says.

Making the boards, and assembling the Swedish-made engines and self-made fins, takes place in a small factory run by Preston.

“No one has the manufacturing capacity to do this (for start-up producers) in Australia. We don’t have a great deal of manufacturing going on anymore. We’d get companies to do work for us, but they’re limited to doing larger orders than we’re ready for. They can only do 2000 a month.”

Preston plans to start producing and selling 20 boards a month, once the final approval for the battery chargers is passed in the next few weeks. The prices will be between $4200 and $4700, depending on board length.

The Prestons are already in negotiation with manufacturers in China and South Africa keen to license the technology. They’re also in discussions with the Queensland Surf Lifesaving team, who are keen to trial the boards.

They’ll be open and selling direct to the public within a month.

“We’re just getting the final approval of the battery packs and then we’re good to go,” Preston says. “Feedback has been pretty good. We get the occasional disgruntled traditional surfer, but lots of others are pretty excited at getting back into the water.”