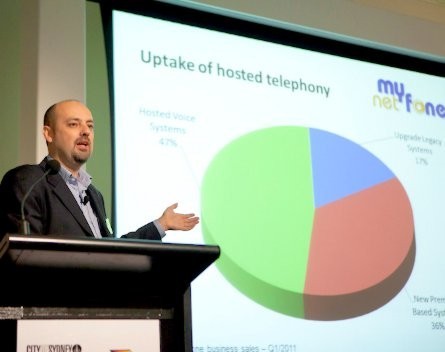 A little over 10 years ago Rene Sugo co-founded MyNetFone. Now the company is worth over $160 million and operates the largest voice over internet protocol (VoIP) network in Australia.

StartupSmart spoke to him about some of his top tips in achieving startup success.

“We realised running a business in the early 2000s, it didn’t cost too much to get the things you needed for your businesses if you’re prepared to do it yourself. The website we did ourselves, the marketing we did ourselves. We tried our hand at everything,” he says.

“Initially we thought we’d work just three days a week, a relaxed sort of thing, but before we knew it we were working six days a week.

“The first few years were lots of hard work. We didn’t pay ourselves a salary. We just had irregular payments when we could.

“It was a bit scary, for my wife and I. We were redrawing from the mortgage.

“We also employed juniors and graduates, they’re a bit cheaper, sure you’ve got to spend a bit more time training them, but they’re keen and motivated and willing to work extra hours.

“All businesses fundamentals are the same, make sure you don’t overspend and don’t overinvest.”

“As you approach a goal, as you get 80% towards reaching that goal, keep on laying out new goals.

“If we stopped when we met our first goals we’d probably still be a business with only five people.

“When we got there, we asked ourselves: What are we going to do next? What are our customers looking for? How can we make the business more scalable?”

“Our next step is to go global, how do we go beyond Australia? We’re looking at the US market and the European market. Our goal three years ago was to get overseas customers, now we’ve got some of those our goal is to really get going overseas.”

Take the right approach to funding

“Don’t give away too much and make sure you shop around and get the best deal. Don’t value yourself too modestly.

“The guys that are giving you the money, whether it’s private money or public funding, they’re out to make money themselves and they’re out to get a good deal. You’ve got to defend your position.

“For the first two or three years we were self-funded, but then we got to a point where we said to really make it to the next stage we needed outside funding.

“We had a lot of proof points already. We looked at venture capital, angel funding, and eventually went down the IPO route in 2006 and that was a real eye opener.

“Unless you have a real definitive plan of where your businesses is going to go, it’s not the plan to do.

“I don’t want to put people off doing IPOs, we’re better for the experience, but you need to know where your business is going and have a scalable business that is growing quickly, to be able to sell to investors.”