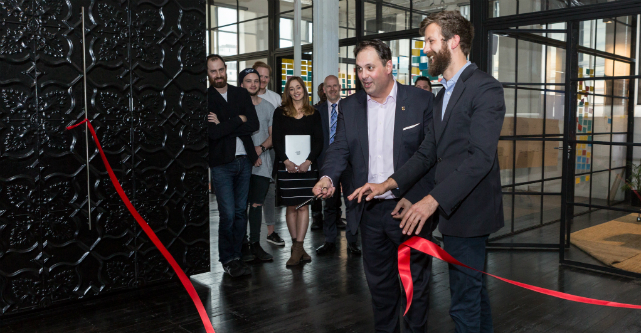 Melbourne-based startup Papercloud has announced a big local expansion that will create an estimated 60 new tech jobs in Victoria across the next two years.

The mobile app developer has merged its former South Yarra and CBD offices into a larger site in Carlton to prepare for the company’s rapid expansion plan.

Victoria minister for innovation Philip Dalidakis, who attended the launch, says that while the state government has made efforts to attract large tech firms to the state, the central focus is on local founders and entrepreneurs.

“Attracting some international talent here is about trying to reinforce that our local startups have access to talent when they need it, as well that we create knowledge transfer, we create a sense of excitement about the industry and we focus on job creation,” Dalidakis tells StartupSmart.

“Victoria has every characteristic it needs to become a major global tech hub and it’s crucial that collectively we provide the resources to nurture local startups, and give them a launchpad to expand internationally,” Holland says.

“We applaud the Victorian government for their efforts in assisting startups and we look forward to the ongoing support.”

The announcement came in the same week as delivery startup MeeMeep opened its new Melbourne office and announced plans to create 30 new jobs in the city.

“They’re about to announce some really exciting relationships with some great big retailers.”

Dalidakis says these local success stories will help to pave the way for more Victorians to build world-class ventures.

“The exciting opportunity there comes from people locally, able to achieve great things and compete and create product that isn’t just groundbreaking here in Australia, but groundbreaking around the world,” he says.

But this isn’t a fight to beat down other states, he says.

“I like the idea that other states will try and outdo Victoria and I had this discussion with Wyatt Roy when he was in parliament as well,” Dalidakis says.

“Competition between governments, whether it’s state or federal level, to support companies that are innovating leads to better policy outcomes for industry participants and the sector itself.”

What governments can do to back startups

When it comes to government action on driving and supporting startups and innovation, Dalidakis says it’s important that policy-makers around the country recognise the efforts of those who are making the leap into entrepreneurship.

“People are looking to achieve dreams,” he says.

“What we’re doing as a state government is simply assisting them to actually see their dreams become a reality.”

To fellow policy-makers, Dalidakis says a partnership approach is critical in providing effective support to the startup and tech sector.

“They need to be genuine about what they do,” he says.

“When you’re trying to work hand in hand with people then obviously those outcomes are joined, and you work together to see that success is shared.”