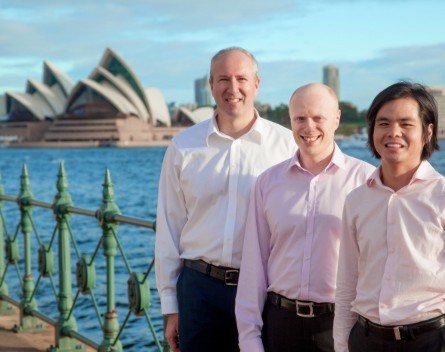 The Sydney Seed Fund is looking to invest in 20 tech start-ups companies over the next two to three years.

Garry Visontay told StartupSmart the trio had identified a funding gap they believe is holding back the Australian tech start-up sector over a year ago.

“We saw this vacuum for a fund working at a very early stage. We thought this would be a great vehicle to provide some financial return but also, importantly, to keep the Australian start-up sector growing,” says Visontay.

The fund has already received over 25 applications since launching earlier this week. In return for the funding, the Sydney Seed Fund will receive a minority stake in the companies they invest in.

They’re looking for globally scalable businesses that are young (18 months or younger preferred) but ready for investment.

“We’re not investing in someone’s idea. We’re looking to invest in them getting to the point where they have the ability to begin earning dollars with their team. They will need to have got their team in place and have their technology prototype completed, or very near to completion,” says Visontay.

“Critically, show us how you’re going to make money. A lot of business ideas get off the ground and their founders have lots of enthusiasm, but they haven’t worked out how their model will actually make money.”

Visontay says the fund is interested in investing in companies with a founding team of two or three, rather than a single person company.

“Getting a tech start-up off the ground is really hard, and a team with two to three gives you greater depth and capacity to grow,” says Visontay. “The skill set is important. In that founding team we’re looking for entrepreneurial skills and business acumen. We’re looking for technical and development skills, and that’s usually the two person combination. The third person is usually domain expertise.”

The investment is designed to help businesses work out how to scale their business. Visontay says the Sydney Seed Fund anticipates the funds will be used for experimenting, sales and marketing, adding some resources and developing their scaling model.

Visontay urges start-ups not to apply until they’re ready.

“Don’t come to us too early. Come to us with your team and your technology ready,” he says.

“It’s very exciting to be exposed to so many new business ideas and the whole start up scene in Australia is just gathering more and more momentum. It’s rewarding to be able to provide some funding and assistance to these businesses to get them off the ground.”

He says the fund expects to announce its first investments within a few months.