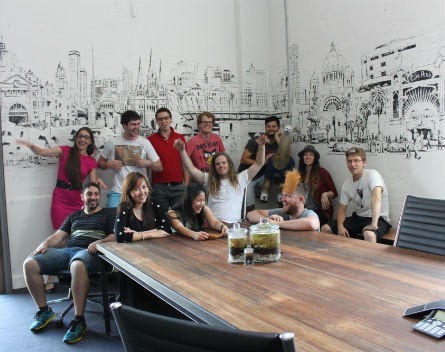 Design marketplace company 99designs is one of Australia’s most successful startups and their new converted warehouse-style offices in Richmond are testament to that.

The open-plan space, taking up the entirety of the rustic building’s floor, houses a foosball, a ping pong table, a Melbourne café style kitchen and a number of “transparent meeting pods”.

This is a company with a lot of money, but there’s not a suit in sight.

It wasn’t always like this, as 99designs COO Jason Sew Hoy points out. Indeed, 99designs had a pretty humble (and organic) beginning, starting as an offshoot of one of Australia’s other great startup success stories, Sitepoint.

It was back in 2008 when Mark Harbottle and Canadian Matt Mickiewicz founded the company after noticing that users started competing in a thread to identify the best designer, and from this the concept of design contests were born.

In just six years the company went from employing a handful of people in Melbourne to over 100 today across Berlin, Melbourne and San Francisco.

Sew Hoy was the fifth or sixth employee hired. At the time, it was just a couple of developers and a designer.

Now he sits in the office café, flanked by engineers and coders who are eating a catered lunch, a once-a-week perk. On the recycled kitchen table sit a number of terrariums the staff made together one weekend. It looks just like any quinoa-serving, community-championing Melbourne café, and that’s no accident.

“We designed this office to not feel like an office,’’ Sew Hoy says. And the casualness extends beyond the office design.

“We don’t have clock-in and clock-outs, we’re reasonably flexible, if people have appointments they need to get to in the morning, that’s cool, as long as they’re getting their work done.”

And of course, like any progressive technology company, they’re agile advocates.

“When you take the waterfall approach you’re placing a big bet behind a system which may or may not be useful when a real person rocks up and decides to use it,’’ he says.

“So rather than taking that all-or-nothing kind of approach and putting a huge bet behind what could be a huge chunk of work, the idea is to build a little bit to begin with. Design this idea of a minimum viable product and have everyone doing their bits to build a small chunk first, have users using it and then learn from that.

“So the key part to that is being much more flexible, being much more collaborative and being able to pivot from stuff you’re seeing and go in a different direction as opposed to having everything predefined.”

Women are few and far between

But there’s one thing that stands out, and it’s not a problem for 99designs alone. After five minutes in the office, and after watching the comings and goings of staff, it’s clear that there are very few women working here.

Across the entire business, 99designs employs roughly the same amount of men and women, but the Melbourne office, where all of the company’s development takes place, women are few and far between.

“We’ve talked about it a number of times, it would be great to have a greater level of diversity, it’s just that you only have a certain pool to draw from and if they’re not here, they’re not here,’’ Sew Hoy says.

“I actually studied computer science at university and it’s just been a worldwide trend; guys are more attracted to engineering and engineering-related stuff and girls don’t tend to get excited by it.’’

He says whenever the company advertises for positions they rarely get any female candidates applying.

“I don’t think I’ve ever interviewed a female, maybe one or two in the entire time that I’ve been here,’’ he says.

“It’s a worldwide problem to solve.”

And it’s not the only issue 99designs is grappling with, Sew Hoy says the company is also trying to stay in touch with its ‘startup roots’ as it continues to grow.

One way 99designs tries to recreate that early startup vibe is by giving the various developer teams full autonomy over the product they’re building.

“It’s not being disconnected from your user base, but instead it’s about having a small team of people that are interacting with their users on a daily basis, they’re closely connected with the problems they’re solving for the community.”

Heading up one of those small teams is Luke Cawood, a developer and tech lead of the team that’s building the newest versions of some of 99designs main apps.

Cawood wrote his first piece of code when he was in grade four, creating a game of blackjack on Commodore 64 using a version of the programming language Basic. By grade 10 he was making mods of popular first person shooter Quake.

“You were a pariah at that point right,’’ he says with a laugh.

“And now it’s like you say you write software and people that are in anyway associated with the startup scene are really keen on that.”

That said, you won’t hear many of the startup scene buzzwords coming from the mouths of developers at 99designs.

“There’s the half-entrepreneur half-coder, like a lot of guys here wouldn’t give two shits about the startup culture and startup scene. They are about software, they come here to write software, that’s their passion.

“Their passion is the art, or the engineering.

“I do think you have to be kind of crazy to write software as well, it’s a weird thing to do with your time.

“Of all the ages in human history to be born with a skill, I’m glad I wasn’t born with the ability to write software in the middle ages because I probably wouldn’t have had a great time.”

But he is having a great time now, and that wasn’t always the case, he arrived at 99designs after working for a digital agency that would engage clients and write software for them.

“That is the worst possible environment to write software in, it’s just terrible,’’ he says.

“Coming here I was pleasantly surprised at the consideration and respect and attention that goes into the production of the software.”

It’s an opinion echoed by one of 99designs senior UX designer Aleks Witko, even coming from what he describes as a pretty progressive employer at IBM, he joined 99designs a little over a year ago.

“It’s very different, I would probably consider this modern, that’s all,’’ he says.