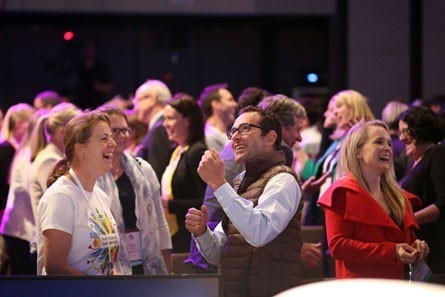 A new co-working space has launched in Melbourne with the aim of promoting “positive human collisions” and making the tech and startup world more inclusive and diverse.

Creative Universe have partnered with Dimension Data to launch the Dimension 5 space in South Melbourne.

“It’s not just about commercial innovation but also about solving some of the wicked social challenges we’re facing,” de Jong tells StartupSmart.

“Tech provides an incredible amount of opportunities and challenges but there are lots of people that get left behind by accelerating technology.

“This is about how we can include the thousands of people who won’t be able to keep up pace with technology.”

The space will be bringing in a “diverse range of people”, including de Jong’s own Creative Universe, Inspiring Minds and global innovation forum Creative Innovation.

The space will be ready by January next year and will open in February or March, with startup membership costing $425 per month, including community events and mentoring.

“These sorts of spaces are critical,” she says.

“There’s a lot of research that shows people become more efficient and productive in these spaces – they build greater collaboration across sectors.

“Cross-pollination is the most important factor for innovation. Collaborating with other diverse people is when innovation really starts.”

It comes as impact investor Geoff Gourley has launched his own social enterprise incubator last week to address a “desperate need” for financial assistance.

The One10 will provide consultation, capital and space to startups in Melbourne, Brisbane, Sydney, Gold Coast and Perth.

De Jong encourages Melbourne-based founders who may be unable to find space in other coworking spaces to apply to join Dimension 5.

“Come along and join us,” de Jong says.

“A lot of the spaces at the moment are booked out. There’s a shortage of space and that’s one of the reasons why we’re starting it.”