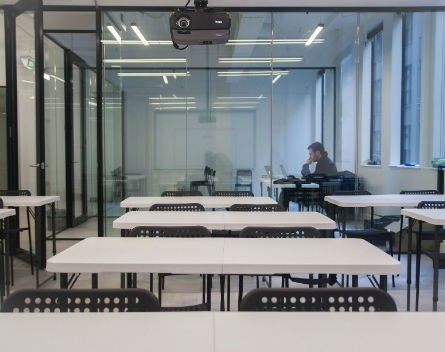 A new Melbourne coworking space is set to launch with a focus on startups, promising an impressive list of partners and a view to hosting mentors, classes and events.

Queens Collective, the sister facility of Collins Collective, has its official launch event on June 27, with UBER, General Assembly and Startup Grind listed as event partners.

Specifically targeted at the startup and hardware maker community, Queens Collective promises to become a “one-stop shop” for community, support and knowledge.

Its founding partners include General Assembly, which will use the coworking space as its Melbourne campus, with Wahuna connecting startups with mentors and Startup Grind organising events.

Founder and community manager Sean Qian told StartupSmart one of the key strengths of Queens Collective, compared to other spaces, is that it was specifically designed for the purpose.

“I spent a lot of time planning and playing around with the layout of this space and designing it for a community, with different styles of work in mind… We’re not just trying to cram desks into a warehouse that wasn’t designed for it,” Qian says.

“We look at the entire lifecycle from a single desk for someone who has just started working on their idea, through to booths for small teams and private rooms once a business gets established.”

Qian says Queens Collective’s close partnerships and its community are its other key strengths.

“While we are not an incubator, we have elements of an incubator. For example, we won’t ask for any equity in exchange for working in our space. We want to add real value by making sure the space is a tool for entrepreneurs,” he says.

A regular event line-up is planned for the space, which has already hosted General Assembly classes for the past month.

“We have a lot of really innovative events coming up for forward-thinking startups. Chris [Joannou] from Startup Grind has helped us to organise events and speakers from its roster… We want to make this a hub for education,” Qian says.

“While Melbourne already has the York Butter Factory and Inspire9, there’s room for another coworking space to add value to the community and become an asset to draw from,” Qian says.

Qian says there has already been a lot of interest in the facility, with one of its four private team rooms already hired out.