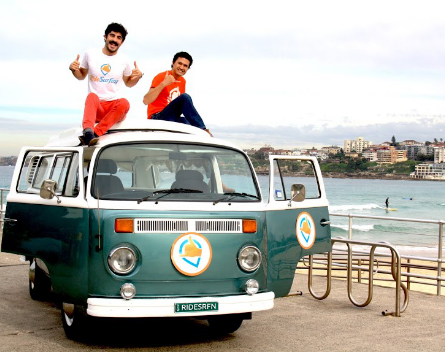 A new ride-sharing app, which has taken a novel approach to getting around legal issues with passengers ‘donating’ money for rides, is set to compete with Uber in Sydney and looking to expand beyond NSW.

Users of RideSurfing are not obliged to pay for their trip but instead encouraged to give a donation. Launched a few weeks ago, co-founder Manutea Dupont told StartupSmart the app has seen good initial traction.

“It’s growing really well,” he says. “We have several thousand people already with the app on their phone and we know a lot of rides are happening every day.”

At the moment RideSurfing is only available in Sydney’s CBD and inner suburbs, but Dupont says they are planning to expand into other cities “very soon”.

The major challenges for the startup have not been too different from others entering the now competitive space for taxi-alternatives.

“The challenge here is that we are trying to build a marketplace,” Dupont says. “It’s a community of people where you have on the one side users or riders as we call them, and on the other side we have the drivers who are background-checked by us.”

Another hurdle has been making sure potential drivers meet RideSurfing’s safety requirements.

“We were pretty strict about safety,” he says. “We do a police check, driving history check, check their car, meet them in person and we train them to use the app,” he says. “All of that takes time per driver and that’s why we started with that since the beginning.”

While state governments have expressed concern over apps that crowdsource car trips and have even issued fines to drivers, Dupont is confident RideSurfing is acting within the law because its donation-based system makes it more like a car pooling service and less like a private taxi ride.

“This is something that is already happening every day,” he says. “Friends being picked up by their friends on their way to work or going to a rugby game or whatever it is. We just want to make sure it happens a lot more.”

While users of RideSurfing are not compelled to pay for the service, the app does provide a suggested amount based on the time and distance of the trip in order to make it sustainable for drivers.

Dupont came to Australia two years ago and says the idea for RideSurfing came about because there was “nothing in between” taking the train or an expensive taxi across the city. The app was fortunate enough to get support from investors from the get-go.

“The potential of ridesharing is something that is big, is having a lot of interest in other countries and nobody else was really doing it in Australia, so that’s how we could get investors to support us,” Dupont says.

His advice to fellow entrepreneurs would be to join a co-working space because sometimes being an entrepreneur can be “a lonely path”.

“One of the things that was definitely a game-changer for us was being in Fishburners in Sydney,” he says. “We were in a space that had such a great energy, such a great network to tap into.”