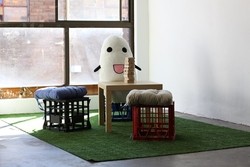 A new Sydney co-working space for creative start-ups will focus on “collaborative creative working”, the founder says, but will accommodate no more than 20 members as it seeks to maintain a level of intimacy.

WhatSpace, founded by creative consultant Lucy Chen, is a co-working space based in the Sydney suburb of Marrickville. The facility has a strong focus on creativity.

“It’s only been running for a month or so but the idea has been brewing for quite a few years,” Chen says.

“I was a freelancing consultant for quite a few years so I worked at home, in cafés – I was always trying to find the right place to work. I had to have people around to bounce ideas off.”

“Creative consultants need the right environment in order to do really good work.”

Chen decided to create the kind of working environment that she wanted to work in, planning to make it available to other like-minded professionals.

“I was on the lookout for a space and I found this big warehouse. No one lives near there so it’s great for late-night events and parties… I loved it straight away,” she says.

“Luckily, the estate agent was quite convinced by my proposal. I had to put down a huge amount of money in order to get this – six months’ rent in advance – so all my life savings are gone.”

With the financial aid of her friends, Chen managed to fit out the space with work stations, lounges and even a pool table, so that it “lets you do what you need to do”.

According to Chen, the site is aimed at start-ups, describing them as the “very definition of creativity”.

However, she says the space is suitable for no more than 20 people, saying 10-15 would be the ideal number.

“The idea is that if you need some help but don’t know where to find it, these people are right there, so we get the right kind of talent in the room,” she says.

“I’m creating a membership system, so members have their own assigned desk. The opening hours are 9am to midnight.”

“It’s going to be fairly flexible with work hours, but 9am-6pm during the week is quiet time. After 6pm, we might have some events or social gatherings or some other events happening.”

“I think the focus is on the community and the collaborative creative working.”

Chen says while she’s aware of other co-working spaces, she feels they haven’t hit the mark with regard to creating the right vibe. Chen has already signed up a handful of people.

“I believe [having a smaller membership base] is an advantage. I do want to establish a wider network of members… [but] a smaller community does work because it becomes an intimate space,” she says.