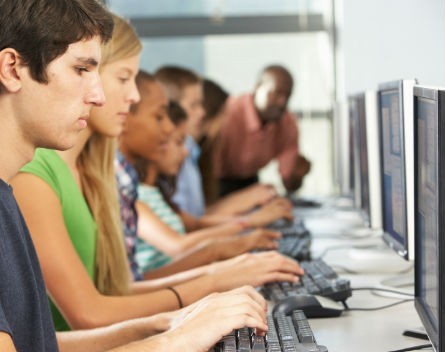 When in the US last year, Prime Minister Tony Abbott visited a P-TECH (Pathways in Technology Early College High School) in Brooklyn partly funded by IBM. He said Australia could benefit from this type of school education model. Last week Assistant Minister for Education and Training Simon Birmingham was in talks to open a P-TECH in Geelong.

P-TECHs are secondary schools that have teaching staff working alongside people from different companies so the world of work is represented in the schooling experience. Rather than narrow job training, P-TECHs teach content as well as its application to work. The schools aim to be relevant and useful for employment purposes.

The P-TECH program is yet another step in the government’s plan to re-institute technical schooling at the secondary level. The policy interest in doing this has existed for at least a decade, but with no real sustained success.

The Howard government announced in the 2004 federal election campaign its intention to establish and fund Australian technical colleges and committed significant funds.

The major problem Commonwealth governments face in this policy area is constitutional. Education is a state responsibility.

A “vertical fiscal imbalance” exists in Australia – meaning the federal government has more money at its disposal than the state governments despite the states having a large number of responsibilities.

This means states will often agree to these policies and to the grants that come with them in order to secure more funds for the operation of schools.

The first time the Commonwealth government involved itself in school education was during the First World War. With the passing of the Australian Soldiers Repatriation Act, partnerships with state education departments were made to provide technical and vocational training to returned service men.

It was agreed the training should take place in state technical schools. As a result of this initiative, state education departments acquired additional buildings and equipment.

The current pilot program to trial the American P-Tech model comes with a modest funding commitment and represents an interesting next step in the decade-long push by the Commonwealth to progress technical education as a secondary school option.

Birmingham seems to be approaching this policy area differently to the initiatives of the technical college and trade training centre approaches of the previous two governments. While courting business, he is also seeking the cooperation of the states and communities where the P-TECHs will be established.

The P-Tech earmarked for Geelong seems to have local community support, along with local employers and businesses expressing interest.

Victorian Premier Dan Andrews and his government may be receptive to the pilot given their recent election promise to establish ten techs.

The P-Tech model in Australia will likely differ from how it operates in the US on several fronts. While the idea of making technical education a secondary school option that includes a sub-degree qualification such as a diploma, advanced diploma or associate degree, this will happen through existing institutional arrangements as controlled by the states.

Unlike the American P-TECH, dedicated new sites are not being mooted. Rather existing state secondary schools and TAFE institutes are being considered.

The parlous situation of the VET market and TAFEs indicates that a new policy approach is warranted. This is especially important for school-aged students whose education goals and priorities do not involve university.

When TAFEs were created in the 1970s, again through a Commonwealth government initiative, this meant that technical education went post-secondary. No longer did technical schools or colleges exist to meet the brief of technical education in the secondary school context.

The P-TECH model decisively moves technical education back into a secondary education context and experience. Science, technology, engineering and mathematics (STEM) will be a focus, which is somewhat paradoxical given technical schools and colleges pioneered STEM in Australia before universities became so prevalent. The involvement of businesses will make work a central tenet of this schooling experience.

In the current pilot, IBM will provide the real-world context of work that is so central to a technical education. IBM is not funding but rather providing in-kind assistance and opportunities for work placements.

Rather than just a general “academic” curriculum, technical schools allow students to see how science is applied in everyday use and at work.

Expanding options for students to stay in schooling can only ever be valuable, so providing a pathway for those students who don’t necessarily see themselves going to university is a good thing.