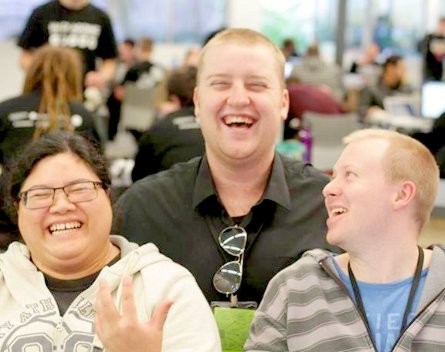 Hackathon coordinator Nathan Waters told StartupSmart the event was focused on fostering the local start-up community and encouraging innovation as Wollongong transitions from being a manufacturing city.

“Wollongong is a struggling manufacturing city, going through something similar to what Newcastle did,” Waters says, adding this is why they included access to eight 3D printers over the weekend.

“We ran with the 3D focus because it’s the obvious transition for manufacturing and technology to merge.”

“The first of these will be an NBN-focused event because of the election soon. We really want the NBN to stay. A lot of people don’t have a lot of imagination about what the NBN will provide, and we want to encourage that,” Waters says.

Over 100 competitors in 34 teams gathered in Wollongong over the weekend to compete for $32,000 worth of prizes in nine different categories in the hackathon, dubbed Hackagong.

Peereo is an online social network for primary and secondary school teachers. Users will be able to upload videos of them teaching for peer review and mentoring.

The highest reviewed videos will eventually be shared on a student site as well, increasing student access to Australia’s best teachers.

Founder Matt Stimson told StartupSmart he had been exploring the idea for a few years.

“The idea is teachers will have a community and they’ll be able to upload videos of themselves teaching the new curriculum,” Stimson says. “The benefits are valuable feedback for new teachers, but also mentoring and comparison.”

With the NBN, national curriculum and teacher diagnostic testing, Stimson and his co-founders, John Redwood and Yetrina Battad, identified a gap in the market for improving student results

“A lot of websites focus on the student development end of town, and the teacher development side often goes wanting, so we’re hoping to address the other side of the classroom. This is about supporting teachers to boost their effectiveness,” Stimson says.

The Peereo team will be focused on developing its web platform, having only had the weekend to develop it.

“We had 30 hours to design, code and launch the new start-up, so we had core functionality built but now we’re tidying it up for public registrations,” Stimson says. “One of my chief roles will be pounding the pavement and recruiting teachers until they gain some more traction.”

Stimson says they plan to develop a testing group in the next few months.

“We’re keen to keep it as simple as possible, so the idea doesn’t get scuppered by the (education) department or principals while we’re demonstrating proof of concept,” Stimson says.

“So far the teachers we’ve talked to are pretty excited about it. We’re all going to keep working on it and the feedback has been possible and the social benefits will be great.”