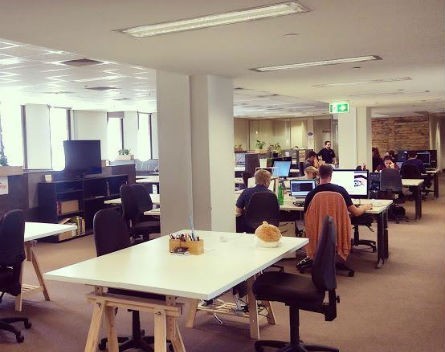 Perth coworking space Spacecubed has successfully raised over $50,000 in a crowdfunding campaign to open up a new space on level nine of its main St Georges Terrace venue.

“We’ve been pretty blown away by the interest. And it’s been interesting, because we’ve had a couple of bigger sponsors, for example PwC have sponsored an idea wall and Optus has sponsored a phone booth,” McCulloch says.

“But it’s otherwise mostly been entrepreneurs and individuals who like what Spacecubed is doing and have contributed small pledges of $100 to $200.”

Spacecubed first launched in September 2012 as the first coworking space in Perth, with the aim of creating a central hub for the city’s startup community. In August of last year, it expanded by opening a second coworking space down the road from its first, at 131 St Georges Terrace.

“Spacecubed has been growing steadily for about two-and-a-half years now. In that time, we got a lot feedback saying they wanted a space for larger teams of five to 10 people,” he says.

“The other consideration was that we wanted it to be in the same building. So we’ll have 140 entrepreneurs and innovators working from our building, at 45 St Georges Terrace. We now have 500 members from a range of social, environmental, technology and creative industries.

“[Level 9 is] another 500 square metres of space with two meeting rooms, four board rooms, another kitchen and good views of the river and spaces for small teams with some coworking space. There will also be enough space for 70 teams.”

Spacecubed is increasingly being used by corporates, not-for-profits and government agencies, such as iiNet, Landgate and AngliCare WA. According to McCulloch, increasing corporate interest in innovation is providing a key boost to Western Australia’s startup scene.

“Bigger companies in Perth – the Rio Tintos and RACs – are looking at innovation, and how to facilitate and collaborate in innovation with the startup communities.

“Recently, Wesfarmers’ chief executive was asked with their biggest competitor is, and he said it’s Amazon. So they’re starting to see the need to understand how the market is changing.”

McCulloch cites the recent RAC SeedSpark program, a joint program between the Royal Automobile Club and Spacecubed, as an example of how corporate interest is helping to boost the WA startup community.

“RAC SeedSpark looked at how to engage people through mobile apps. And rather than build their own, they put out a challenge around five categories, They had 200 interested people submit 50 ideas submitted, and nine finalists presented their idea to a panel of experts.”

“The idea that was selected was Today We Learned. It’s an app that allows teachers to talk to 50 parents in just 60 seconds. It’s not an idea that the RAC would have come up with on its own, and yet it fits in with learning and education, which is one of the RAC’s central missions.”

While some entrepreneurs have already begun using the new space, the official launch event for Spacecubed Level 9 is coming up on November 5.