Pocketbook looks to raise $700k ahead of Dubai pitch competition 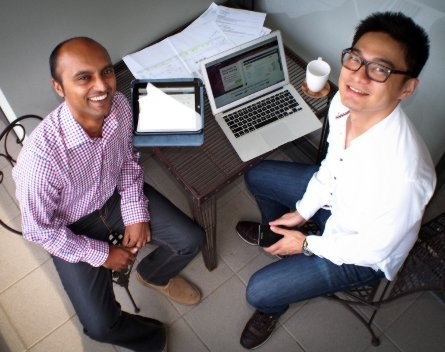 Personal finance app Pocketbook is hoping to raise up to $700,000 from local and foreign investors before heading to Dubai in September for the chance to win $50,000 at Sibos 2013.

Pocketbook, founded by Sydney entrepreneurs Bosco Tan and Alvin Singh, who have known each other since they were schoolboys, promises to make personal finance “ridiculously simple”.

It helps users monitor their bills, minimise bank fees and late payment penalties, and stay on track with their budget and savings goals.

The business was only founded in August last year but already has several major runs on the board. In February, it was one of 10 start-ups shortlisted for the Optus Innov8 Seed Program.

Then in April, it was one of 11 start-ups chosen to pitch at Echelon Ignite: Australia.

Now it is bound for Dubai after being selected as a finalist for Sibos 2013, which is offering a cash prize of $50,000.

Sibos, organised by the Society of Worldwide Interbank Financial Telecommunication (SWIFT), is an annual conference, exhibition and networking event for the financial industry.

Pocketbook will compete at Sibos following its success at the SWIFT-sponsored Innotribe Startup Challenge, held in May in London, New York and Singapore.

In Singapore, Pocketbook was one of three early-stage start-ups selected for Sibos 2013. The other start-ups are PassportFX and z-crd. Two growth-stage companies – GIEOM and V-Key –were also selected.

Pocketbook was the only Australian company selected as a finalist.

“[Pocketbook is solving] a really global consumer problem. Everyone in the audience really identified the problem we’re trying to cover,” Tan told StartupSmart.

“The market over there is very much [along the lines of], people have multiple credit cards, multiple bank accounts and it’s very much front of mind for them.

“A lot of other start-ups are concerned with more B2B-type financial services – not all of them but a large proportion.”

Tan says Pocketbook has generated a lot of interest, from Asia and Europe in particular, and is keen to fast-track its growth. It is hoping to close its first round of funding within the next month.

“That’s probably the range that will give us just over a year of runway to execute the next things we want to execute. We want to build out the product and we also want to acquire users.

“The money will [also] be used to build out a team but we want to do it progressively, and based on the right people with the right fit and the right skills.

“We’re looking to base the company here in Sydney.”

According to Tan, Pocketbook has had no trouble attracting investors.

There’s been overwhelming interest from the market. Our job really is to find the right investor and the right partner who can help us take our vision forward,” he says.

“We’re just filtering through who the right partners are. It’s been relatively pain-free from a raising money perspective compared to other businesses I’ve seen.

“We just seem to be getting a lot more interest than what we’re asking for.”

Pocketbook is also eagerly anticipating its visit to Dubai.

“Because SWIFT has something like 10,000 member banks, their global reach is significant and the nature of the organisations that will attend [Sibos is impressive],” Tan says.

“One of the biggest things we’ll get from that – even greater than Singapore – is, again, validation. To have access to SWIFT members and explore potential opportunities is great.”