Pollenizer jumps on co-working bandwagon with The Hive 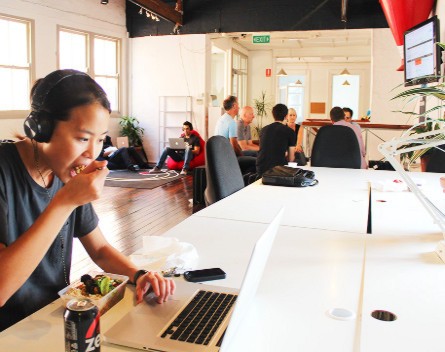 Online venture builder Pollenizer is the latest entity to jump on the co-working bandwagon, opening a co-working space called The Hive, which already counts Posse among its members.

The Hive, which insists it’s “not just another co-working space”, is a Surry Hills-based warehouse spread across three floors and 700 square metres.

In addition to four meeting rooms with televisions and whiteboards, perks include WiFi, office equipment, iOS testing devices, a kitchen, a rooftop deck and even a library.

There are regular training sessions, practitioner camps and Friday “X-Pollenizations”.

Pollenizer co-founder Phil Morle says the space is not associated with now-defunct start-up networking group The Hive, which disbanded in 2011 after nearly four years.

“The Hive is just what we call our own offices essentially, in Singapore and Sydney,” Morle told StartupSmart.

“Over the last few years we’ve noticed an existing community here at our premises in Surry Hills… We get entrepreneurs and investors from all over the world, partly through events we run.

“We decided to open that up to the broader community now – to come in and share that space with us.”

Morle describes the venue as “a cool sort of quirky place”.

“There are two main floors but there are three levels altogether, with lots of different rooms, and nooks and crannies… We’re imagining we’ll get about 50 members coming in and out,” he says.

“I think we want entrepreneurs who are trying to build new internet businesses – really the kind of people we’re looking for anyway.

“People who want the benefit of explicitly sharing a learning experience with other entrepreneurs [are the ideal candidates].

“They will be part of a community of other people doing similar things, so they will learn from that.”

According to Morle, there are two kinds of co-working spaces.

Morle says while Pollenizer’s portfolio companies are welcome to use the space, they won’t be given priority.

“If someone came and got permanent desks, [the perks are] exactly the same for one of our portfolio companies,” he says.

But not everyone in the space is new to the tech scene, says Morle.

“We’ve got the ex-CEOs of companies like Yahoo! in our office… [Also,] Posse just decided to move in – we just filled up the ground floor with Posse today,” he says.

Morle says the space also draws on the strength of the Pollenizer network.

“We’ve really got great people to learn from,” he says.