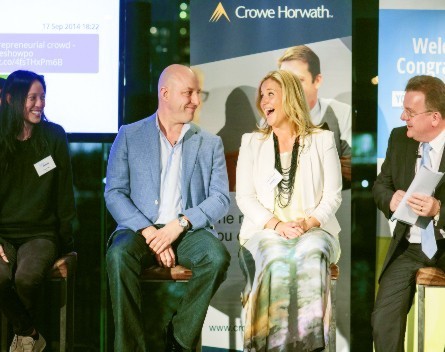 If you’re starting out as an entrepreneur you’re likely to be a PHD: poor, hungry and driven, according to last night’s panel of serial entrepreneurs at the SmartCompany and Crowe Horwath Smart50 awards.

In a discussion hosted by Small Business Minister Bruce Billson, the crowd heard from Freelancer founder Matt Barrie, Harteffect and Unigrad founder Andrea Culligan and startup veteran Susan Wu, one of the original investors in Twitter and Square.

Barrie says if you’re a PHD you’ve got nothing to lose by starting a business.

“What’s the worst that is going to happen, in two years you are exactly where you are now?” he says.

Barrie’s entrepreneurial spark stemmed from realising he was “fundamentally” unemployable.

“Being an entrepreneur is like crawling on your hands and knees through broken glass staring into the abyss,” Barrie says.

“One day you are on top of the world, the next day everything is going wrong. It is like two steps forward and one step back.”

His advice to fellow entrepreneurs is to ignore the doubters.

Wu agrees that being an entrepreneur can be tough, describing it as generally “an incredibly lonely experience”.

“You basically have to ignore 99% of what people are telling you and figure out exactly what you believe in yourself and commit to that,” she says.

Culligan also advocates taking a risk by starting a business, testing an idea, putting it out there, marketing it and testing whether there is value in it.

She says you can do all of this without spending a dime.

“If you do have a concept or you do have an idea, don’t hide it, share it, because if you are sharing it and you have some success then build it,” she says.

“You are going to build your tribe quicker that way rather than hiding your idea first and then finding out once you spent $150,000 on all the technology that goes with it.”

For Culligan, being a serial entrepreneur is about picking yourself back up and finding opportunities for regeneration and learning from them.

“I think we need to celebrate those failures a lot more often to become more successful and to do it a lot more quickly,” she says.