Becoming A Franchisor, Franchising, Growth, Growth Strategy, How I Did It

Prevailing from the Mexican stand-off 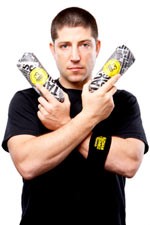 Steven Marks’ enthusiasm for Guzman Y Gomez, the Mexican restaurant chain he started up, is palpable. He speaks about the business with the excitement of someone explaining their ‘eureka’ moment for the first time.

Marks’ verve is evidenced by the first Guzman Y Gomez (named after two childhood friends, commonly abbreviated to GYG) outlet he opened, in the Sydney district of Newtown in 2006.

The desire for authenticity saw a Mexican chef flown in to oversee the food, with Latin staff and Mexican-sourced ingredients aimed at appealing to Australian tastebuds that, Marks felt, had been missing out on a genuine Mexican gastronomy.

However, Marks had to correct several missteps before the business became cashflow positive, six months ago.

Consumers just didn’t get the concept to begin with. Despite this, he insists in typically upbeat fashion that the initial “pain” of starting up was crucial to GYG’s success.

“I would never give up the pain of those first three years, ever,” he states. “It was invaluable. It was painful, yes, but I didn’t give up my job for something that was easier.”

“Getting that consistency and the cashflow was much harder than I imagined. You need deep pockets and you need to spend wisely. Most businesses set up a couple of stores and then struggle. We did it the other way around – we struggled initially and then we fine-tuned the business.”

The job Marks refers to was as a hedge fund manager in London and New York. Caught up in the ultimate rat race, New Yorker Marks decided to turn to entrepreneurship in the unlikely setting of Sydney.

“I was tired of betting on other people’s companies and the culture of greed got to me,” he recalls. “I thought ‘I’m out of here’.”

“My best friend was moving to Sydney in 2002 and I was burnt out, so I thought I’d head to Bondi for a break, as I’d seen pictures of the beach. I didn’t ever end up going back.”

Marks wasn’t a stranger to entrepreneurship – he ran businesses as diverse as snow ploughing to t-shirt retailing with his twin brother while at university – and he attempted to turn several brainwaves into viable enterprises.

His initial ideas to build a beachside hotel in Sydney and went as far as raising money for the concept before realising that “people here just don’t spend their leisure time like that – there’s a different vibe here” and abandoning the idea.

The second concept managed to get off the ground, with Marks and his best friend, Robert Hazan, selling Australian fashion labels to the US. However, Marks says he “freaked out” at how the market was faring and sold up.

The idea that had legs was devised after Marks experienced an unpleasant meal at a Sydney Mexican restaurant.

“It was horrible. Absolute shit,” he contends, rather bluntly. “Where I grew up, there were a lot of Latins and there was a lot of great Mexican food.”

“I knew that Aussies wanted it. All they had was Old El Paso, which was the biggest seller in supermarkets and was clearly inferior. We knew we could sell the food at a $10 price point.”

Convinced that he could set up a “high volume low labour” alternative that would resonate with Australian diners, Marks and Hazan ploughed their own money into the venture – a total of $5 million was invested in premises, stock and systems.

Design guru Tony Ibbotson created the colourful GYG branding, which included a logo featuring the faces of the eponymous duo.

Marks went to great lengths to offer a new kind of Mexican dining experience. He settled on Newtown – “it was a bit like East Village (in New York), it had a great mix of gay people and yuppies” – for the first GYG location and spent 18 months prior to launch in 2006 getting the offering right.

“Most of the staff were Latin and we brought over a Mexican chef,” he explains. “We originally dealt with mom and pop stores for supplies and then went directly to suppliers in Mexico. We did a lot of food tastings.

“We wanted people to see how the salsa and guacamole was made and make the kitchen into a theatre.”

“So many restaurants, such as Thai restaurants, dumb down their food for Australian palettes. We wanted to create something more authentic.

“We also wanted to create a contemporary Mexican, urban, young vibe. The brand isn’t about tequila, sombreros and donkeys.”