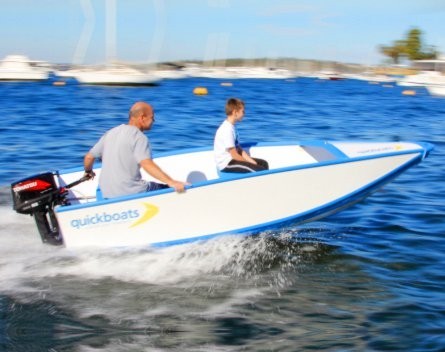 Entrepreneur Deryck Graham bought the rights to the designs of a flat-packed, quick construction boat in 2012, and is now on track to achieve a $2.4 million turnover.

The boat had been designed in 2005, and had to wait seven years before it was launched last year. Graham told StartupSmart the start-up had offered him the opportunity to explore emerging technologies and business models.

“The boat can be transported down to the beach or across the nation just like a surf board. From a business point of view this is fascinating, because it breaks the boat business model with its heavy delivery issues, because we can courier it to your front door,” Graham says, adding that they can ship 40 of the boats in one container.

Also in 2012, Graham went on to raise over $1 million in seed capital from their own funds, from investment group NKH Capital, and  $65,000 from a crowd-funding campaign on Indiegogo.

“The boat plan was in slumber for five years, and we purchased it back then. In September, we raised $1 million and could drop the flag to start the business,” Graham says.

The Quickboat product was launched in August 2013 at the Sydney International Boat Show. The boats sell for just over $4000.

With a waitlist of over 1000 and on track to sell 600 boats by the end of this year, Graham says his team’s challenge now is to ramp up their manufacturing and fulfilment systems.

“Getting the product into production and getting it delivered is the biggest challenge. We’ve done our release and we’ve got an amazing response with a big waitlist and over 50 orders, but the boat won’t be delivered until November,”Graham says. “So our absolute focus is on the delivering the boat.”

Quickboats has a core team of two, and works with over 30 contractors. They create monthly video blogs to keep all of their stakeholders, including crowd-funders and potential customers, in touch with their plans.

“We totally exist in the cloud, and that has been the philosophy of the business since day one,” Graham says.