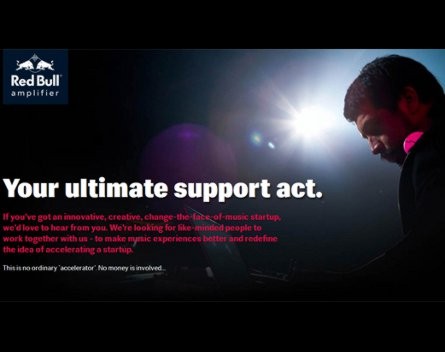 Red Bull Amplifier is, according to company spokesperson Gemma Lacey, designed to help the most innovative music start-ups by giving them access to Red Bull’s international network.

Red Bull Amplifier, developed alongside London-based design and innovation agency Sidekick Studios, is being positioned as an alternative to incubator heavyweights such as Y Combinator.

“Redefining the standard accelerator model, no money will change hands,” Lacey wrote in a company blog.

“The program is a creative partnership designed to help start-ups that are ready to scale their business by engaging them with Red Bull’s networks and enhancing its existing music properties with innovative technology.”

Submissions close on April 22, and up to 10 successful applicants will be informed by May 27.

Lacey said the submissions will be screened by a panel of industry experts including singer and producer Ghostpoet, Ciara Bryne from VentureBeat and Dave Haynes from SoundCloud.

According to Haynes, Red Bull Amplifier is well placed to meet the needs of music start-ups.

“Sometimes it’s not enough to get a small amount of funding or the accolades that some start-up accelerators provide,” Haynes said in a statement.

“What counts for early stage music start-ups is exposure to a critical mass of potential new users.”

Red Bull Australia could not be reached for comment.