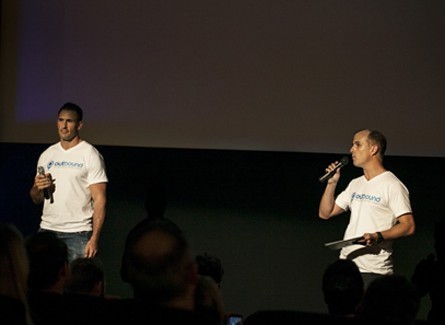 The inaugural cohort in the River City Labs and muru-D accelerator program have come “a hell of a long way”, especially behind the scenes, Outbound co-founder Ryan Hanly says.

The 14-week program kicked off in September, offering the five teams $20,000 in funding in exchange for 3% equity, along with co-working space, mentoring, training and access to global networks.

Following the accelerator’s demo day last week, teams have been offered double the funding as part of a three-month extension of the program. If they choose to take part, the startups will get a further $20,000 cash injection for another 3% in equity.

Outbound, a social media platform for travellers, has seen its user base nearly double during its time at River City Labs, with downloads nearing 26,000 and active users up by 85%.

But Hanly says some of the most important aspects of the program were the internal benefits.

“From the outside we may not be that much different but internally we’ve come a hell of a long way,” Hanly tells StartupSmart.

“We’re a better, more rounded team than we were coming in and it gave us the opportunity to really focus on the product. That was the best thing for us personally.”

He says the accelerator program also gave unrivalled access to other entrepreneurs, investors and mentors.

“The people we’ve been exposed to and some of the masterclasses have been amazing,” Hanly says.

“The calibre of the mentors in the program has been really good, and they’re people we otherwise wouldn’t have been able to get in front of by ourselves.”

The other four participating startups have also seen significant benefits from the program.

Peer-to-peer lawn moving platform GreenSocks has doubled its team size during its time in the program and has enjoyed rapid growth, Social betting app Puntaa is on the hunt for a $750,000 funding round and has already secured $150,000 and ProcessPA is set to close a $90,000 seed round early next year.

“The bar has truly been set by the five teams of our first ever accelerator program,” Anthony says.

“It has been fantastic to see their consistent gains and achievements and I am looking forward to their continual growth in the coming months and beyond.”

Runway to do it right

Most of those involved are now looking to complete funding raises and Hanly says one of the main benefits of the program extension will be to give runway to make sure this process is done right.

“That will give us the time to not rush that process and it’ll give us breathing space,” he says.

Outbound came into the program more established than the usual accelerator startup – it was already used in 100 countries – and Hanly says it’s important for founders to recognise the benefits of these programs for companies of all stages.

“It’s never too late to join a program like this,” he says.

“Some teams might think they’re beyond it but you can be quite advanced in product and team and still get a lot out of it.”

For the Outbound team now, it’s all about expansion and capitalising on the many lessons taken from the accelerator program.

“We’re really looking forward to expanding the team and spending some money on advertising,” Hanly says.

“With the extra funding we’ll be able to pour some fuel on the fire and that’s a luxury we haven’t had before.”