Robogals are go! Program aims to get more girls into STEM 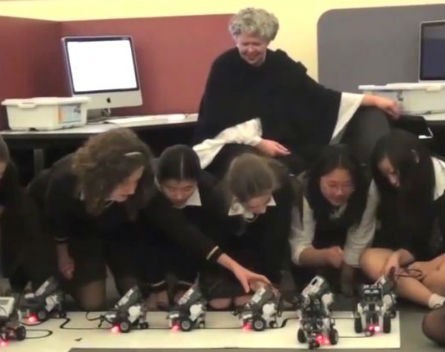 When Marita Cheng realised that she was just one of five female students in her 50 strong electrical engineering degree, she knew something had to be done.

In 2008 she launched Robogals – an international not-for-profit organisation that encourages female students to take up engineering, science and technology courses and jobs.

Today it has more than 5000 members in 25 chapters around the world, including in the United States, the United Kingdom, New Zealand, Beijing and Tokyo. The organisation visits primary schools and high schools, including in rural areas, where they host activities that engage the students to solve challenges while having a good time.

According to Cheng, not enough girls are choosing maths and sciences during middle school and high school. In 2011 the Australian census found that women represented just 11.8% of the engineering workforce. Unemployment among female engineers who were in the labour force was almost twice the rate for men. The following year, a study conducted by Engineers Australia noted that only 13.8% of tertiary engineering students in Australia were women.

Shirley Tian, president of the Robogals program at the University of Melbourne, blames outdated gender roles, where women are expected to be committed to their family and to look after children.

Cheng says many organisations today recognise gender disparity as a problem and are committed to solving it. She noted the “tremendous support” she received from industry leaders during her tenure as head of the programme.

“A lot of companies are trying to bring more women on-board,” she says.

“They want a diverse workforce. If the environment is rife with sexism, then women very quickly realise they don’t belong there. They want to be at certain companies where they are not the only female in a room of men.”

The University of Melbourne, where the program has its origins, has some 40 active volunteers who are in their first and second year of study. The program committee at the institution consists of eight people, including three school managers and a sponsorship and marketing head. Its affiliation with the schools of engineering helps them in attracting partners and sponsors, and hosting Open Day and O-Week events.

Tian says that they primarily target year 3 to year 10 students. Their workshops involve working with robotics, where students bring their own laptops and build robots, making them solve various puzzles and obstacles.  This year, her team hopes to visit over 40 schools and increase their presence in regional Victoria.

“Our schools managers are contacted by the teachers who encourage us to make more visits. The girls get very excited about programming while the boys get jealous,” she says.

“There are a few rural schools that call us back every year and the feedback from the students has been very positive. We want to reach some 1300 girls this year and recruit more volunteers so that they can pass their passion onto younger girls.”

The chapter organises various marketing and networking events. It also holds an annual industry gala where they thank the volunteers and industry leaders for their support.

“We invite industry professionals to talk about their role and day-to-day working life. After that, volunteers engage with students to teach them about robotics,” she says.

“We are also looking for more sponsors to join us. NAB and Caterpillar support our chapter. We also have affiliations with organisations like BioMelbourne Network and Go Girl, Go for IT.”

Cheng has since left Robogals to work on her own startup, 2Mar Robotics.

“I wanted to extend myself. I was telling girls they could do anything they wanted. I realised that the most powerful way to convey that message was by going out and doing things myself,” she says.