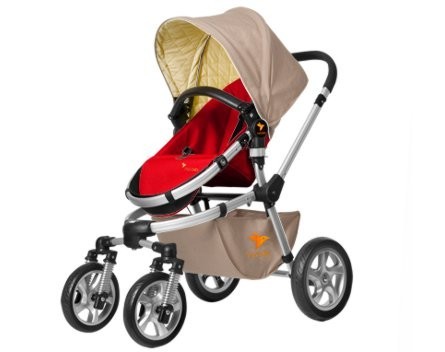 They don’t have kids themselves but that didn’t stop Rosh Ghadamian and Tahir Baig from jumping into the pram business.

They’ve created Rozibaby, a business that lets customers design their own pram online.

“We didn’t see that as a disadvantage,” Ghadamian, 29, tells StartupSmart of the pair not having kids of their own.

He says they want to “jazz up” an industry many would consider to be not very sexy.

“We wanted to make something that would make us proud pushing ourselves.”

Ghadamian says he got into prams by “accident”.

“I was asked to explore the possibility of distributing some baby products for a client of ours that went from furniture retailing to baby retailing,” he says.

“Through the research I did I identified that customers weren’t getting a consistent or valuable experience going to retail stores for prams, and that on the product level people were only given the options of an expensive, off the shelf product with very little information or education.”

Launched in May 2012, Rozibaby has gone from strength to strength, with whole mother’s groups using their prams. Their pram has also been used on popular television program House Husbands and they’ve been selling out of product lines.

“It’s a great problem to have,” Ghadamian says.

He says Rozibaby prams start at $599, which is a significant saving on other retail prams that can cost over $1500.

Prams can take up about a third of the total purchases a couple may make for their new baby, Ghadamian says.

“It’s akin to buying a car for some people.”

Ghadamian says they originally started out as a multi-channel retailer, selling through bricks and mortar retailers as well as online.

But he says they found customers actually preferred dealing with them directly.

With that, around seven months into the business, they decided to sell only online.

“It was quite a big jump for us. It was nerve wracking.”

The move paid off however, with the business taking just three months to beat their first full year of sales.