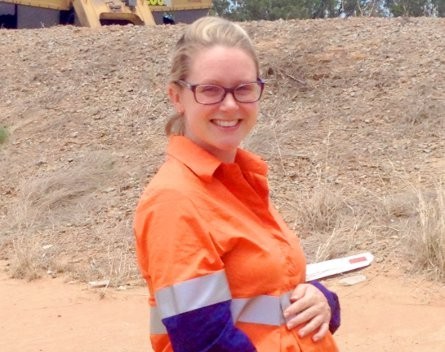 It was while working on a mine site in central Queensland that Kym Clark came up with her idea for high visibility safety shirts tailored especially for women and those who were pregnant.

The sight of her pregnant manager wearing a men’s high vis shirt unbuttoned over a singlet shocked her into realising there were no maternity shirt options for women in the mining industry.

That realisation inspired her to start her She’s Empowered work clothing line for women working in industries such as mining, construction and transport.

“When you’re comfortable you feel confident,” she says.

In Australia there are around 42,000 women working in the mining industry full- and part-time, making up 15.5% of the industry’s workforce, according to the Australian Mines and Metals Association.

Clark says she’s sold around 300 shirts so far in the mining states of Queensland, New South Wales and Western Australia, as well as in the Northern Territory, and large companies are also supporting the label.

Clark started working in the mining industry after graduating from university with a commerce degree, majoring in accounting.

She says she’s also interested in fashion and is enjoying the opportunity to bring together her two passions.

“I have loved working in mining,” she says. “I think it’s a great industry to launch and progress your career.”

She’s now working part-time in the sector as she builds her business. Clark quit full-time work as she had no phone reception at the remote mine site she was working at and couldn’t make calls about her business during lunch breaks.