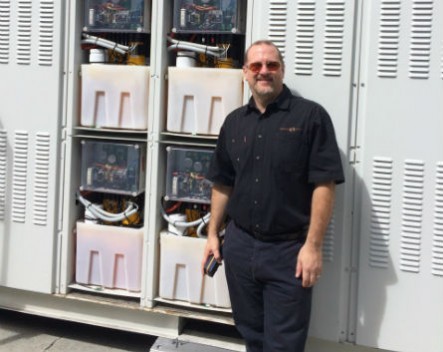 Pioneering Australian tech entrepreneur Simon Hackett has invested $1.5 million to purchase a quarter of graphite miner Oakdale Resources’ initial public offering, predicting a clean energy tipping point will be reached in the next five to 10 years.

A pioneer of the Australian internet industry, Hackett is best known for co-founding internet service provider Internode in 1991, which he sold to iiNet for $105 million in 2011. He is also a former director of iiNet and a current director of the NBN Co.

Under the latest deal, Hackett becomes the lead investor in Oakdale, which was launched by Queensland miner John Lynch and has a 2008 square kilometre tenement on South Australia’s Eyre Peninsula.

Hackett told StartupSmart he predicts that, over the next five to 10 years, energy storage systems will experience a similar reduced cost/increased performance curve to the solar industry.

“When energy storage (batteries of all sorts) wind up costing less per kilowatt hour over the life of the battery than the cost of grid-supplied energy, ‘everything changes’,” Hackett says. “This won’t be a gradual shift in the use of energy storage, it’ll be a tipping point – and we’re right on the verge of it happening.”

According to Hackett, aside from being the key material in the humble lead pencil, graphite is a key input in high-peak-energy-output batteries.

“It is the latter use that I see as a huge growth area in the next decade,” he says. “Then there is the ‘blue sky’ opportunity to turn graphite into graphene. Graphene is a super-material, whose overall properties (in electrical and physical terms) are almost unbelievably good. The challenge with Graphene is in coming up with ways to manufacture large amounts of it in a commercially tractable manner.

“My investment in Oakdale doesn’t pre-suppose the Graphene industry succeeding, in order for the investment to make sense. I think it makes huge sense on the back of the emerging step change in the production of high energy batteries alone – with Graphene being the blue-sky bonus opportunity on top of the battery-based market demand.

“Take a look at the Tesla gigafactory that is being developed right now, and consider that it won’t be the only new battery plant being built that will need a lot of high quality graphite.”

Hackett describes the investment as a journey toward the source materials that power all of these technical revolutions in the Internet era.

“For me, that was an opportunity to consider whether there was such a thing as a ‘green’ investment in the mining industry – an industry I had otherwise stayed away from because my primary focus is in sustainable technology,” he says.

“The reality is that all of this technology is built on things that people have to dig out of the ground.”

Aside from his investment in Oakdale, Hackett is set to join the board of directors for Redflow in November, which recently completed its initial trials with its prototype large scale energy storage system.

Hackett stresses his latest mining investment is in parallel to, and different to, his investment in Redflow, as Redflow doesn’t use graphite in its batteries.

“One class of batteries (‘power batteries’) can be charged and discharged at very high peak energy levels (appropriate for transport applications like electric cars). These are the ones that need graphite in them, and typically they are rare-earth metal batteries such as Lithium Ion based ones (as in the Tesla electric cars),” Hackett says.

“The Redflow batteries are in the other class of battery, called ‘Energy Batteries’,  that are designed for a regular daily duty cycle of energy delivery at a relatively constant rate of charge and discharge. These are more appropriate for stationary applications in off-grid renewable energy systems or in grid-interconnected arrangements designed to level out peaks in daily demand.”

Hackett says he is open to making further investments the battery storage/cleantech space if suitable opportunities come up.

“I don’t actively solicit investment opportunities. I tend to go out and find them proactively –this was the case for both Oakdale and for Redflow – because it’s a sector I follow closely,” Hackett says.

“I’m not ruling [establishing an investment or venture capital fund] out, but it’s not currently on the things-to-do list.”

Pictured: Hackett standing next to the prototype Redflow battery array.