Six takeaways from a discussion on the future of fintech 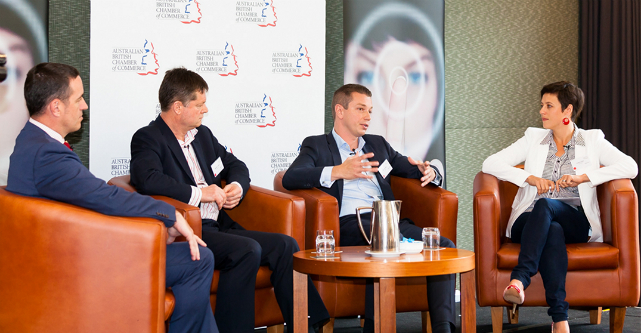 When I was young I didn’t think I would be an entrepreneur or that I would have this amazing opportunity to help Australia’s entrepreneurs and companies innovate.

What I wanted more than anything, even more than toys and candy, was to fly. One day, I read an article in a science magazine promising that in about 10 to 15 years we would be zooming around with our very own jet packs. Can you imagine my excitement? And my inevitable disappointmen, – it’s 2016, where is my jetpack?

When I was asked to moderate the Australia Bristish Chamber of Commerce Fintech panel, sponsored by LaunchVic, one of the suggested topics was to explore where fintech will take us in the next five to 10 years.

Ten years – think about it for a minute.

It’s been almost 10 years since the GFC. Since then policymakers have concentrated on making finance safer, and the involvement of regulators means that compliance is more important than ever and that the box within which financial institutions must operate from a regulatory point of view is getting smaller.

But remember that in those same 10 years the likes of Facebook, YouTube and the first iPhone arrived on earth. Only a handful of people could have predicted how just those three new products would drive millions of people to spend hours online and how it would fundamentally change people’s expectations of what technology can and should do for them.

On one hand we have a force that wants to avoid the risk of the unknown at all costs and on the other we have an acceleration towards the unknown. Yet both sides are looking towards technology to solve their problems.

It’s this tension between the contracting landscape from a regulatory perspective and expanding and lawless nature of the internet, that has made the last 10 years some of the most exciting times for fintech.

At the luncheon I got to discuss this with three experts: Matt O’Keefe (Partner at KPMG), Bart Jesman (CEO at FinSuite) and Michael Cooper (CTO in the Financial Technology Services Group at British Telecom).

Here are my six key takeaways from the conversation:

Startups attracted $12 billion of investment in 2014, up from only $4 billion the year before. Fintech isn’t big just because the government is talking about innovation – it touches and drives innovation in all verticals – perhaps we should think about it as a horizontal rather than a vertical.

2. Blockchain is more disruptive than you think

We were all undecided about whether this is going to be a contracting or expanding force in the industry, because it basically decentralises and distributes power and control – which has much broader economic and political implications than we had time to address.

Nobody in the room believed that fintech startups are going to kill off traditional banks but we noticed a trend where fintech disrupters cut costs and become the interaction layer between the institution and the consumers.

Fast forward 10 years and this could leave banks with “narrow banking” functions like payments infrastructure and secure accounts as their last untouchable offers. This could mean that the biggest competitive advantage banks have is their security and trust, not the products they offer.

4. The most popular platforms are wealth management, invoice factoring and lending

Whether it’s London, Melbourne or Singapore, each fintech ecosystem has its own unique flavour. Australia is one of the leaders when it came to the provision of software for wealth management, because of the rapid introduction of superannuation in the 1990s and the changing regulations associated how we do financial planning here.

Fintech startups see technology as driver, whereas financial services see it as an enabler.

That’s because startups are in touch with problems and customers, able to move fast and iterate fast, and financial services tend to focus on growing established businesses through incremental improvements and efficiency, often creating groups that we refer to as unbanked or under-banked (which make perfect target groups for startups).

Initially, banks don’t care that startups are serving that small sub-group of customers… until their offering starts eating into their traditional business. It’s a death by a thousand cuts scenario.

6. You can’t ignore the regulation

To create a sustainable business, fintech startups must consider the regulatory and compliance landscape and create their businesses from within that. Compliance has traditionally been seen as an obstacle to innovation but that is largely due to organisations interpreting regulation to severely and adding an excess of compliance into their operations. Knowing and complying with the regulatory landscape also gives startups the ability to collaborate and work with incumbents to achieve scale faster.

But that’s only the opinion of four people.

I also took to Twitter to ask you guys what fintech means to you. My favourite response was:

Fintech is the phenomenon that occurred after 2000 years of hoping we could sip coconuts in the Bahamas rather than ‘do’ tax.

This piece was originally published on the BlueChilli blog.