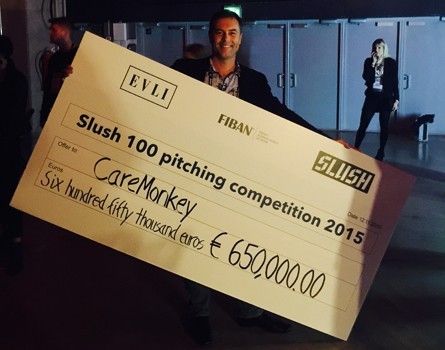 Melbourne-based startup CareMonkey now has 650,000 reasons to be smiling.

The medical information company won first place in the Slush tech conference pitching competition in Helsinki, beating out thousands of other applicants to bring home a cheque for 650,000 euros (nearly $1 million).

CareMonkey impressed the judges with its system of managing sensitive personal and medical stored information by schools, clubs and groups with a duty of care.

“There’s been high fives all around,” Heese tells StartupSmart.

“We woke up to the news this morning and we were so excited.”

Howell says the prize money means his company can expand beyond Australia.

“We can take this into the US. That’s where we see the big market with clubs and schools open to new technologies,” he says.

Heese says the team were also hoping to use Slush as an opportunity to develop partnerships in Europe.

“We get stories every day where a child’s been injured and the paramedics say [about CareMonkey], ‘oh my god, this is fantastic’.”

Just this week, the team heard how one school was able to speedily administer care to an injured student.

“Because they had CareMonkey, the teacher was able to ring the ambulance and parent straight away,” Howell says.

“The parent was even able to ride in the ambulance alongside their child.”

It’s not the first time CareMonkey has been recognised on the global stage, with Westley also recently taking out the top prize at the Talent Unleashed Awards and winning a trip to Richard Branson’s private island.

The startup also took at Best Startup Idea at last year’s StartupSmart awards, and has been growing rapidly this year.