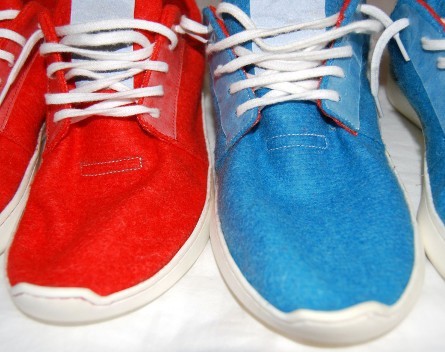 A sockless running shoe made from a wool fabric has won its team one of the first places awarded in a United Kingdom-based start-up program.

Melbourne business graduate Jonathon Spanos will join New Zealander Tim Brown in London as part of the Sirius Programme, a UK Trade & Investment accelerator scheme to enable graduates with innovative start-up ideas the chance to make the UK their home.

Spanos told StartupSmart he met Brown at the Kellogg School of Management in Chicago, in the US, where he taking part in an exchange program and where they discovered they shared a love for running.

They looked into the idea of creating a start-up business based on a minimalist running shoe made from a woollen fabric that wouldn’t need socks to run in and would be odourless.

“It’s a novel idea. Not many people would associate wool with running,” Spanos says.

“From all the feedback, we’ve got a great concept.”

The 33-year-old, who’s just completed an MBA at the Melbourne Business School, has a background in the biotech industry and will work on the operations side of their start-up, called ToBe, and pitching to investors.

ToBe plans to launch a Kickstarter campaign to sell their shoes in early 2014.

Spanos says the shoes feel like pulling on a pair of socks and are “quite huggy”.

The Sirius Programme provides the ToBe team a 12-month place in an accelerator, £12,000 and mentoring and networking support.

Brown says in a statement that ToBe is creating “a whole new, unique category of footwear based on the biodegradable and sustainable properties of wool”.

“Entirely negating the need for socks, our invention aims to revolutionise the way everyone from everyday athletes to professionals train,” he says.