Not even the general manager gets a desk: Fishburners’ “heartbreaking” lack of space 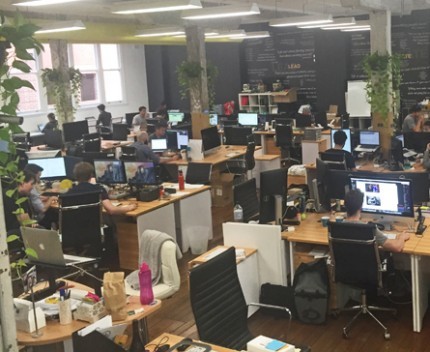 Every single day a burgeoning startup in Sydney co-working hub Fishburners will ask for more space.

And every single day Murray Hurps has to turn one of them down.

“I look around the room and see there’s not a single space,” Hurps tells StartupSmart.

“There’s nothing that keeps me awake more than the problem we have with space.”

Hurps even gave away his desk to a startup long ago, and now floats between couches and the local cafe. Two recent Fishburners hirings also don’t have space for their own desk.

“Even the general manager of Fishburners can’t get into Fishburners because of the demand,” Hurps says.

Australia’s largest co-working space is filled to the brim, and it’s beginning to overflow.

“There’s been a suggestion to stack the desks on top of each other,” Hurps says.

Affordable nearby locations for an expansion or an entirely new, larger location have been on the radar for Fishburners for years, but for no avail.

For the moment, successful startups that are rapidly expanding are having their growth stunted by this lack of real estate.

After first coming to Fishburners as part of a startup, Hurps says it hurts him every time he has to turn a company down or prevent it from expanding.

“For someone that’s put the time I have into supporting startups, to have to restrict their progress is continually heartbreaking,” he says.

“Any single startup you have to do something to restrict their progress is heartbreaking. To have to say it repeatedly is even more so.

“No one in my situation wants to be a real estate agent. It’s incredibly unpleasant to deal with. But I feel better about it by thinking that we’re doing it so the startups don’t have to.”

Founded in 2011, Fishburners has quickly grown to be the largest co-working space in the country. In the heart of Sydney’s ‘startup street’ in Ultimo, the space is now filled to the brim with aspiring entrepreneurs and young, scalable businesses.

The management team isn’t in it for the money – Fishburners is pointedly a not-for profit started by a Silicon Valley venture capitalist and a local entrepreneur, and takes no equity in the companies it houses.

It’s in a prime location on Harris Street, in walking distance to UTS, TAFE buildings and the ABC, and for Hurps this central proximity is critical. For Fishburners to be truly effective, its new space needs to be very close – around 5km according to Hurps – so it can uphold its tight-knit community spirit.

Fishburners is also becoming a victim of its own success in many ways. The venue seems to be too valuable for many of the startups that refuse to leave, even if they yearn for more space.

“The problem is that they don’t leave,” Hurps says.

“People in here share expertise and connections, so they stay. They put employees in other places and they do round-robins on desk usage.

“It gets pretty ridiculous.”

The search for more space has been ongoing for more than a year with little success.

“We’ve been trying for a year and a half to solve it, and we’re still trying,” he says.

“It was urgent six months ago.”

With all the current rhetoric surrounding startups and innovation at all levels of government, and a general push to create more high-growth tech companies, it’ll be to no avail if there’s nowhere to effectively accommodate them, Hurps says.

“It’s hard to see a clearer barrier to the progress of this industry than this issue,” he says.

“We’ve sorted out so many paths of what it takes to build an ecosystem. Fishburners’ goal is to create the most startups possible – to inspire, to provide space and to connect them with support.

“The first and last things we’re doing very well, it’s just the space that is the problem. We could be doing so much more than we are if we could be saying ‘yes’.”

It’s not a unique problem for Sydney or Australia either – Hurps says it was a common discussion point at a recent Google summit in California, where 34 partners were all facing the same problem.

There are opportunities arising around the city though. In October it was announced that a huge coal-fired power station would be redeveloped into a “world-class” tech hub with aims to create a ‘Silicon Harbour’.

Closer to the CBD, the 14-hectare Australian Technology Park will also be redeveloped, with 75,000 square metres set aside for “tech and innovation users and startups”.

But Hurps isn’t pinning his hopes on either of these sites.

“With the power station, startups won’t stay in the area after they grow – it’s a missed opportunity to create a critical mass,” he says.

“The White Bay Power Station is definitely not that, but the ATP could potentially be that.

“The complication is that both spaces are five years away at least. There are so many things that could happen from now and then that would make it less appealing.

“We need a solution today to provide growth for five years.”

Hurps says he wishes the NSW government had been more consultative.

“In terms of state engagement, it could be a little better,” he says.

“They’re doing a lot to explore what to do, but it would’ve been nice to talk to them before White Bay was announced or to have been involved with the ATP.”

For Hurps, there are likely to be many more workdays split between the couches and café as he searches for room to expand.

“Either we find something that we can afford in that range or someone with a desire to support things at a much larger scale is willing to take that out of the equation entirely,” he says.