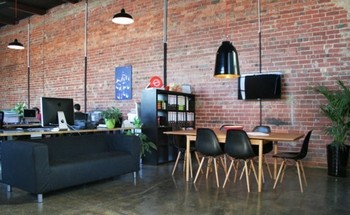 The co-founder of Melbourne-based start-up Paydirt has sung the praises of new co-working space House of Commons, which is also home to Melbourne start-up success story BugHerd.

The Abbotsford co-working space was launched earlier this year by Marc Katsambis, founder of Koodoz Design.

Katsambis says he established House of Commons as a way of bringing together like-minded people, having previously worked in another co-working space that “didn’t really click”.

“The people we’re looking at are people in the tech space – developers for the web, copyrighters and digital artists,” he says.

Katsambis says there are currently six desks available, although the space can comfortably hold 20 people. Residents are required to bring their own hardware and their own chairs.

The space has all the creature comforts, including a meeting area, a television for demonstrations, a fully-functioning kitchen, a Playstation and a table tennis table.

“The best thing is being able to share information about how to run a business – how to do things effectively and get a lot of inspiration and ideas about the latest trends,” Katsambis says.

“It’s hard for one person to retain all that information. If there are 10 or 20 like-minded people, it opens up a whole other world.”

Paydirt, founded by Nicholas Firth-McCoy and Tristan Gamilis, produces online time-tracking and invoicing software for freelancers, from its base at House of Commons.

Firth-McCoy claims the best thing about House of Commons is the feedback you receive.

Firth-McCoy and Tristan Gamilis were inspired to start-up based on their own experiences as freelancers.

“You do a lot of contracts throughout the day. It comes to the end of the day and you have to make up who you’ve worked for when. It’s quite difficult quoting the jobs,” Firth-McCoy says.

“You get to the end of the job and you have no idea whether you’ve lost money or made money.”

The pair raised $6,000, which, according to Firth-McCoy, lasted for six months, although he admits he and Gamilis are “scraping by”, paying themselves just several hundred dollars a week.

“We’ve just launched Chrome and Firefox extensions that figure out who you’re working for automatically, based on the websites you visit and the emails you write,” he says.

“The extensions are our minimum viable product, aimed at freelance web developers and designers.”

“Our next step is to produce desktop and phone apps that broaden the range of people we can automate time-tracking for.”

In addition to Paydirt and Koodoz Design, House of Commons is also home to BugHerd, which recently secured $500,000 in funding from Melbourne-based venture capital firm Starfish Ventures.

Founded by Alan Downie and Matt Milosavljevic, BugHerd came about after the pair was unable to find a bug-tracking solution suitable for logging and managing visual website issues.

After honing their idea, Downie and Milosavljevic pitched to Sydney-based incubator Startmate and were selected to participate in their start-up class of 2011.

BugHerd has also attracted investment from US-based incubator 500 Startups, becoming the first Australian company to participate in the 500 Startups program.

“The major thing [BugHerd has taught us] has been the importance of keeping good metrics,” he says.

“They really pressure us to make sure we know how many people have signed up in the last seven days, conversion rates, traffic, etc,” he says.