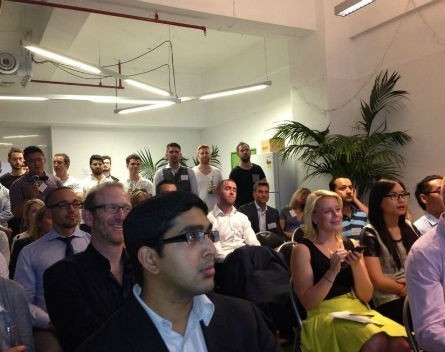 Theopening speech for was delivered by the Parliamentary Secretary to the Minister for Communications Paul Fletcher, who told Private Media the Startup Weekend program is a means by which people interested in becoming entrepreneurs can dip their toe in the water in an accelerated way.

“I think there’s no doubt the Abbott government wants to see a vigorous startup community in Australia – there’s a growing sense of momentum gathering,” Fletcher says.

Event organiser Darcy Naunton told Private Media the new platform comes at a time Startup Weekend events are “gathering more and more startup people than there’s ever been before”.

“Startup Weekends have obviously been around far longer internationally than they have in Australia – they first started out in Seattle – but we’ve been running them in this country for about three-and-a-half-years now,” Naunton says.

“The first was in May 2011 at the Melbourne Sensis office and the second was in the York Butter Factory in November 2011. Since then, we’ve rolled out events in Sydney and Brisbane in late 2011 and 2012, and from there we’ve had local champions to organise events in other cities.

“Now what we’re doing through Startup Weekend Australia is bringing a little more coordination and help with sponsorships to help make those local events viable.

“Every one of them is run by a volunteer, venues are donated for the event, and tickets often only cover around one-third of the cost of organising an event. We think sponsorships can help out a lot.”

Startup Weekend events run for 54-hours spread over three days. After pitching ideas on Friday night, aspiring entrepreneurs and developers are grouped into teams and given 54-hours to turn their ideas into a minimum viable product.

According to Naunton, the platform will help people looking to organise events, as interest grows in hosting events at regional and rural incubators.

“We’re a support network for local Startup Weekends, so we’re not going to go out and start Startup Weekend Horsham – say – ourselves, but if someone in Horsham wants to organise an event in Horsham, there’s a number of ways we can help them out.

“We can help them find a co-ordinator that has helped to organise Startup Weekends in the past. We can help with the format of that event, and we can help to make that first event a good one.

“If that works, they can be more autonomous for the next one, and we’ll help them out more with sponsorships.”

“In other states, it’s dominated by an event in the capital city, but in Queensland people have been to events and then come back and organised one in their home town,” he says.

Recently, the Toowoomba Startup Group recently held its first Startup Weekend event, while Cairns is preparing to link up with events in Townsville and the Gold Coast.

“It was fantastic, a very successful event. We had around 30 participants and around 20 ideas pitched. And as far as participation goes, there was a 50:50 gender split, so we had 15 male and 15 female participants,” Masefield says.

“Greg [Burnett] from Startup Weekend and Startup Lakes said it was one of the best participation rates in Queensland outside female-only events. And out of the 30, maybe two had participated in a Startup Weekend before, so we expect an event bigger turnout next time.

“We were impressed with all five of the teams that formed, especially the three teams on the Global Startup Battle Track. They included Roll Call Global, which is developing a device that signals accidents on quad-bikes in the event of a rollover or a flip; Checker Style, a fashion app at an economic price; and Time Trade, which is developing a gamified method for people what want to volunteer.”