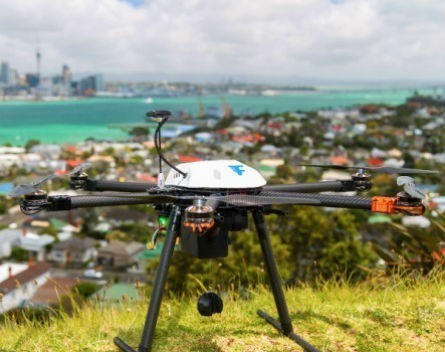 Sydney startup Flirtey will conduct the first commercial drone deliveries in the United States to be approved by the Federal Aviation Administration.

The first approved flight will take place on July 17 in Wise, Virginia, in partnership with NASA and Virginia Tech.

Two unmanned aerial systems will deliver up to 24 packages of pharmaceuticals and other medical supplies to a free medical clinic in the area.

The aim is to show how drones can deliver urgent prescription medication in a quick, efficient and cost-effective manner.

The Flirtey delivery drone is a hexacopter made from carbon fibre, aluminium and 3D printed components in order to be lightweight and durable.

Each vehicle has a range of more than 25 kilometres return, lowering its cargo via a tether.

The drones also have built-in safety features, and will land in a safe location should there be a low GPS signal or their batteries begin to run out.

Speaking to StartupSmart from San Francisco, founder and chief executive Matthew Sweeney said the scheduled flight was “incredibly exciting” for a company that has only been in the US for one year.

“This is the first step, or if I can use a NASA term, a giant leap to opening up the US market,” he says.

“In Australia you need approval for commercial activity and in New Zealand it’s a much lower bar. But until very recently there was a nation-wide ban on commercial drone activity in America. So this will be what we anticipate to be the first approved delivery of medical supplies [by drone] and a huge first step to this becoming routine.”

His co-founder Tom Bass was equally optimistic, describing the upcoming flight as an important step in revolutionising medical care for people living in regional and rural areas.

“This is the first step in proving that on demand drone delivery can revolutionise the way medical care can be delivered to remote communities, and eventually form your local pharmacy to your front door,” he said in a statement.

“This will be a game changer for millions in America.”

The partnership saw the drone startup deliver medical supplies to help New Zealand Land Search and Rescue treat a person who had been missing in a remote area.

The startup plans to eventually roll out drone delivery in the fast food and online retail sectors.