Beyond the buzzword: Federal secretary Glenys Beauchamp on what innovation really means for government 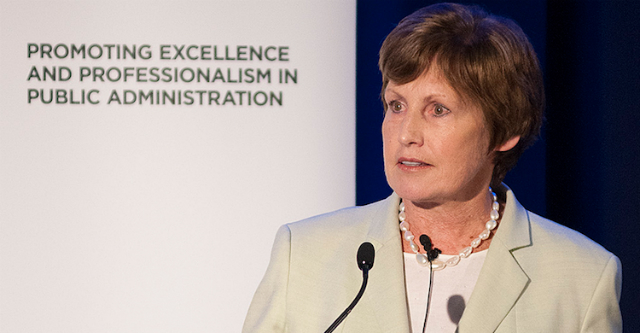 Buzzword fatigue is not an option at the Department of Industry, Innovation and Science. At a recent conference, Secretary Glenys Beauchamp discussed the real meaning of innovation for government, as a facilitator, a catalyst and an exemplar.

Beauchamp was delighted to have the words innovation and science re-attached to the federal department she leads, but admitted candidly she feels the pressure of being front and centre in the Prime Minister’s signature policy as both facilitator and exemplar.

In terms of the first role, innovation is far more than a buzzword for Beauchamp, an economist by academic background.

Speaking at a recent Institute for Public Administration Australia (ACT Branch) conference, she got straight to the practical point of the National Innovation and Science Agenda: “as much as 50% of long-term economic growth comes from innovation,” according to the Organisation for Economic Co-operation and Development.

What is the role of government in this process?

“In the portfolio that I’m in, most of us economists talk about our involvement as addressing areas of market value,” she said.

“For example: access to information, developing a skills base, ensuring we’ve got a good regulatory framework; that the macro frameworks for operating are effective. In this sense, the government is very much a facilitator.”

Conference host Virginia Haussegger later asked Beauchamp directly about the sense that innovation had become a buzzword or a cliche.

“I think it has been used as a buzzword but if I look at some of the buzzwords of the past, about continuous improvement and all of those things, I mean it’s really accepting that we’re operating in an environment of change and you want to do your best and you want to be thinking of new things,” said the Department of Industry, Innovation and Science secretary.

“That’s what it’s all about … being open to what’s possible and taking the initiative to do something about it.

As well as making sure the regulatory, taxation and workplace relations frameworks are as “enabling” as possible for businesses, while investing in education and research, government is also expected to be an innovation catalyst, she said.

According to Beauchamp, “there definitely was an announcement effect” from the NISA in the form of a “significant” positive effect on the economy.

“And I must say I feel under a huge amount of pressure in my portfolio, with ‘innovation’ in the department’s name, and if we’re not leading by example, by showing the rest of the public service what is possible but also walking the talk in terms of what we’re asking businesses to do, then I think we’d be failing.”

For the public service to walk the talk as an innovation exemplar, its advice should favour “using the government levers that we have got” and avoid creating another layer of “programmatic confetti” around areas like tax and procurement.

The imperative to rethink, not just re-tweak

As Beauchamp warned later in the panel discussion, policy advice to government is now a very “contestable” space, meaning there are lots of competing providers and if the government as an advice “customer” doesn’t find what it is hearing from the public service compelling, it may well go elsewhere.

“If we aren’t responding to the customer’s needs, we become irrelevant and we would be abolished,” she said.

“I think Treasury and PM&C are the long stayers but the rest of us, the government does make changes to organisations and governance and I think it’s up to us.

“We get appropriated a lot of money to run big departments, sometimes small departments, so the sole imperative should be on us to deliver, as it is in business.

“I don’t think we take that attitude.

“I think we [as public servants] very much [repeat] what we’ve always done, and we just tweak it with a bunch of processes… rather than looking at the whole canvas and saying, ‘What can we do with the resources we’ve got?’.

“And we’ve got a responsibility to run it for the long term and to be sustainable.”

For example, the government is currently considering the recent review of the Research and Development Tax Incentive, which aimed to determine what impact it is having and how it could be more effective in encouraging more private money to be spent on R&D.

“We do need to do more about what we’re getting in terms of that impact, and we’re going through that process with the recent review,” she explained.

She said “the history of the most innovative nations on earth” showed that government should be a lot more than a facilitator for the private sector, pointing out that a lot of “revolutionary technologies” have come out of government-funded research organisations.