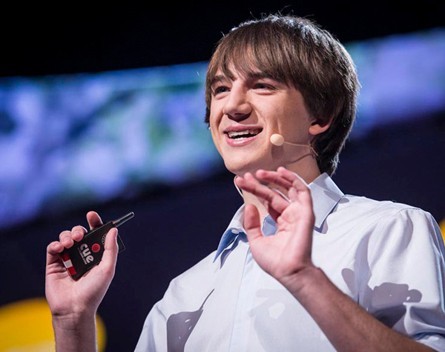 If governments want to create the jobs of the future they need to stop talking about science and technology skills and start removing the real barriers that hamper young people from accessing scientific research.

That’s what an innovation conference heard from a US teenager who created a simple and effective cancer test while he was in eighth grade.

Speaking at the Wired for Wonder conference in Melbourne this morning, 18-year-old Jack Andraka said one of the biggest hurdles he faces as a young innovator is not people constantly saying no, but rather the costs associated with accessing a lab and previous research.

Here are four things to take away from the young innovator’s speech.

Andraka said in life, it is all too easy to lose track of why you are pouring your energy into a particular project.

However, the trick is to keep the “unseen person” in mind – the person whose day you are making better by what you do.

“These solutions to a real-world problem wouldn’t mean as much to me if they weren’t designed to contribute to another human life,” Andraka said.

“However, in science we are often taught that empirical results and logic reign supreme, and it’s the end result that matters most – science created for the sake of science.”

2. Have an optimistic, go-getter attitude

Nothing ever gets done unless you take a chance and tackle a problem head-on, according to Andraka.

“I set out with eighth grade biology to solve cancer diagnostics,” he said.

“My rationale was the current test sucks so much that anything I could do would be marginally better. So I shut myself in my room and researched all I could about proteins. Finally, on the 4000th try when I was losing my sanity, I finally found one protein that could work.”

3. Never give up, even when things seem impossible

When Andraka finally figured out how he would go about conducting his cancer test, he decided to contact 200 professors to see if he could gain access to a lab.

However he was knocked back by 199 of them.

“I thought I could pick and choose my lab, but then reality struck,” Andraka said.

“I got 199 rejections and then I realised professors are not as nearly as nice as their glowing profile pictures make them seem online. But I kept going and finally got one positive response.”

One of the biggest things stopping innovation is the financial hurdles young people face in accessing research, according to Andraka.

For example, accessing an academic paper online can cost more than $35 – which is more expensive than your average iTunes album.

Andraka said it is not much help if governments or political leaders say they want to foster STEM skills but at the same don’t tackle issues around how information is shared.

“But the biggest difficulty was accessing scientific information. Right now, 90% of scientific articles are locked away behind paywalls. This exponentially increases the cost of your research, particularly for young people such as myself.”