Hackathon peers into future to answer the big money question 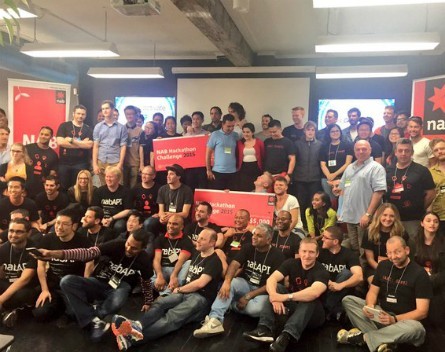 More than 100 entrepreneurs came together to imagine the future of banking at Fishburners in an event that marked NAB’s first foray into the hackathon craze.

The challenges revolved around trying to foresee what money might look like in five years’ time, and how NAB could use its existing platforms to explore other business opportunities.

Fishburners general manager Murray Hurps tells StartupSmart the hackathon was a natural step for NAB, a company eager to get behind entrepreneurs.

“We’ve dealt with a lot of partners at Fishburners and it’s wonderful to see a company that just wants to be a supporter of startups,” he says.

Despite running its own innovation unit, NAB Labs, Hurps says the bank – like any big company – must look outside of itself for new ideas.

“There’s only so much you can do internally,” he says.

“If you’re a $100 billion company, you have to go through so many steps that nothing ever happens.

“You need to be able to allow things to happen externally.”

Hurps was also a judge at the NAB hackathon and says the winning idea, which came from a team called NAB Saver, was a way for customers to forecast the long-term financial impact of their banking decisions.

But the hackathon wasn’t just for NAB to harvest other people’s ideas. Hurps says at least a dozen NAB staff attended the hackathon to share news of the company’s latest projects with participants.

Hurps says events like the hackathon are necessary for NAB and its peers to keep ahead of changes in the banking sector.

“It’s not going to happen overnight, but in 10 years, and 20 years, the banking model is going to be very different,” he says.

“It’s hard to diversify away from something that is so successful, but I think they have to.

“And there’s so much they’ve accumulated.

“If you have 100,000 business and retail customers and loan recipients, it makes so much sense to start to use that in different ways and realise opportunities.”

It comes as the likes of NAB and the other big banks in Australia are facing increased pressure from tech-savvy competitors and fintech startups.

This week independent EFTPOS provider Tyro closed a $100 million investment round after recently being granted a full bank license.

It is now dubbing itself a “next generation bank” and will be using the cash injection to take on NAB and the other big banks.

With events like a hackathon, NAB is trying to collaborate and work with entrepreneurs rather than compete against them.

Hurps says some people don’t appreciate the potential of these events.

“They talk about hackathon fatigue, but they’re wonderful,” he says.