Inventor aims to get thought-controlled wheelchair into production phase 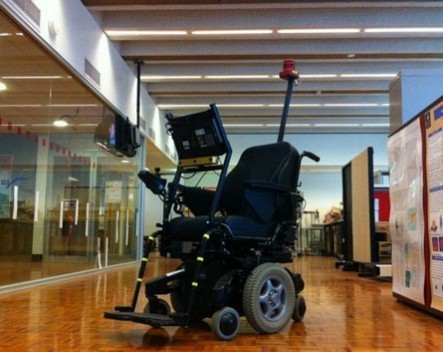 It’s difficult to imagine anything more terrifying than blacking out and waking up in a hospital bed, realising you’re unable to do anything but blink.

For some people that have accidents or conditions that cause high-level disability, like locked-in syndrome, that’s exactly what they are faced with.

Australian startup Psykinetic has developed a thought-controlled wheelchair that it hopes will give those people some of their independence back.

The startup’s founder Jordan Nguyen, who is speaking at Wired for Wonder this week, developed a thought-controlled smart wheelchair prototype while completing a PhD in Biomedical Engineering at the University of Technology, Sydney.

The prototype works – but the problem is price. The prototype involved adding around $40,000 of technology to a wheelchair. Nguyen the Psykinetic team are hoping to bring that price down to about $4000.

“I want to bring that down to around 10% of the original cost. It’s also going to be able to achieve a lot more than the research prototype did,” he says.

The smart wheelchair is controlled by a headband worn by the user that detects electrical signals, which reflect changes in the user’s thoughts.

“Once we have this next prototype, I have my sights set on working with a couple of wheelchair manufacturers to build it into their products,” Nguyen says.

“We don’t want to start a whole wheelchair from scratch. That would take forever. There are a lot of people who need this tech to reach them sooner.”

Psykinetic has received grant funding to develop the prototype, but it’s also being funded by Nguyen himself. Initially the plan was to set Psykinetic up as a charity, but after a board member left for Silicon Valley, that plan was scrapped.

“It astounded me how difficult it was to set up as a charity. We needed three directors, a constitution all set out, I got to that point and then one of our directors left,” Nguyen says.

“So I tried to find another one, but in that process was advised against it given (Psykinetic) is essentially a product development company. I started learning more about social enterprises and realised it should go more that way.”

Nguyen’s interest in robotics and artificial intelligence actually came with an early experience with virtual reality. His father purchased him a virtual reality headset in the 1990s and he loved it, despite the headaches.

“I originally wanted to design things for when personal VR would catch up,” he says.

“So I had two different types of camera systems on the original wheelchair, a stereoscopic camera system, and a panoramic or spherical camera system. I recognised that if the two were put together we could have 360-degree 3D film footage that would be fantastic for VR.

“The vision enabled the wheelchair to see everything around it while it was traveling. Determine where all the people were so it could react in a way that means it wouldn’t bash into them as it was finding its way.”

Nguyen has put his career on hold in order to focus on Psykinetic, he’s yet to seek external investment for the project, but says it’s something he might consider down the track.

“Everything seems to be working really well at the moment, we’re getting a lot done,” he says.

“As far as investment goes, I’ll definitely be open to it, but I’ll be planning out each phase as it comes.”