Meet Ziggy, the border collie whose limb was saved by a Queensland 3D printing startup 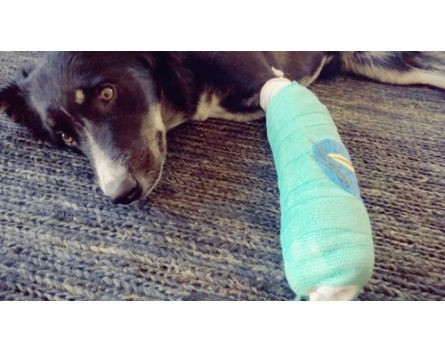 3D printing has come to the rescue for one lucky dog in Queensland.

Ziggy, a border collie belonging to veterinary students at the University of Queensland, was born with a deformed front leg.

However, the veterinary clinic was unable to operate until they could create a 3D replica of the bones in Ziggy’s affected leg.

Cash-strapped and unsure of where to turn, the students and their professor decided to contact Don McGuinness – a resident of River City Labs and the founder of a 3D printing startup currently in private beta.

McGuinness told StartupSmart that despite being a strange request, he leapt at the opportunity to lend a helping hand.

“They had 3D scans of the dog’s leg, but in order to fabricate a missing piece they were going to staple into his leg to make it complete, they needed a 3D physical representation so they could fabricate the piece in advance,” he says.

“Obviously when they start cutting him up they have to have the piece to put in straight away. So they were casting around for where they could get this 3D printing job done… so they called and asked me if I could do the job.”

The operation was completed a week and a half ago, and the students are now waiting with bated breath to see if Ziggy the pooch will make a full recovery.

McGuinness specialises in using 3D printers to create rapid prototypes and patterns for moulds. Because of this, printing a dog’s front leg proved to be a challenge.

“It was a job that had some technical aspects that created difficulties I hadn’t seen before, so I did have some challenges to overcome,” he says.

“But I managed to do it in about two days, and on the third day I had a print. When they [the students] received the model, they were very happy with it. It was a perfect representation of what they had on their screen.”

South Australian 3D printing startup Makers Empire has recently struck up deals with South Korea and the US to educate primary school students about the emerging technology.

The story of Ziggy the dog shows how 3D printing has a wide range of practical uses, according to McGuinness.

“You’re only limited by your imagination,” he says.

“The important part is having the skills to use your 3D printer to maximum of what it can do.

“The important part is having the skills to use your 3D printer to maximum of what it can do. That’s been my advantage over a lot of people – I know people who have bought kits and put them together and didn’t know how to use them for anything except printing little owls or toys because they didn’t have the skills to expand into other areas of printing. It’s just lucky that I had a mechanical, electrical and engineering background.”

As for whether he and his 3D printer will come to the rescue of more animals in the future, McGuinness says his door is always open.

“I’ll make my services available to the university if they have any other situations arise,” he says.

“I’ll do it free of charge, for the sake of the dog of course. Because of my love for animals and technology I’d be very interested in any other situations of this nature and, of course, if humans were involved too. But I think there’s a lot more resources for humans and plenty of 3D printers printing prosthetic limbs.”