Microsoft CEO Satya Nadella on our world’s future: “Trust is the new currency” 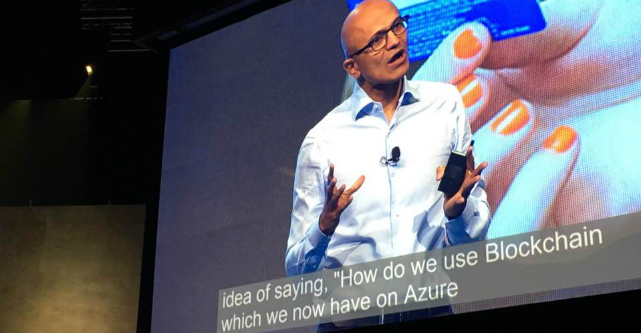 “Trust is the new currency when it comes to digital technology,” says Microsoft CEO Satya Nadella.

Speaking at a Microsoft Australia developer event in Sydney, Nadella called for greater democratisation of artificial intelligence and new computing to empower all people to become creators in the digital age.

In the last decade, Nadella says technology was about consumption, but that is about to change.

“In the next ten years, there’s going to be more of a balance between the creation and consumption of technology,” he says.

“The opportunity is enormous, the question is really how do we step up to take the responsibility to have broad impact?”

The responsibility of developers to democratise technology

From day one when Bill Gates established Microsoft, Nadella says the heart of the company has been about enabling people through technology.

Read more: Melinda Gates on the “enormous mistakes” the tech sector must avoid

This, he says, is what drives them and informs every decision, especially now, as the balance of tech creators to consumers is changing.

“I’m a product of democratisation of Microsoft,” Nadella says.

“This company does what it does to bring technology to all sectors of the globe.”

While it’s important to push the envelope on digital technology, Nadella says developers must consider the people who will eventually benefit from the products or services created.

“Every developer has both that opportunity and also the responsibility to create surplus in our economy,” he says.

“What developers are able to do with these new computers and new platforms to have real impact is what gives us meaning to the work that we do.”

Every business should think digital

With the emergence of artificial intelligence, new computers, smart devices and the internet of things, Nadella says all businesses, from retail and insurance through to healthcare and mining should start embracing these developments to succeed.

“You do want to think of yourself as also being in a digital business,” he says.

“Things like machine learning and artificial intelligence are not just for consumer internet companies.”

Nadella, who fulfilled a lifelong dream by walking on the Melbourne Cricket Ground this week, says innovative sporting companies like Cricket Australia are now setting an example of this.

“I was glad to see how cricket Australia plans on using machine learning,” Nadella says.

“The idea that developers can bend the performance of even cricket players is one of the most empowering things I have seen in my life.”

What world do you want to build?

Innovation with purpose is fundamental for a better and more empowered world, Nadella says.

Creating technology with the purpose of enabling every person on the planet, is what led them to initiatives like Seeing AI, a project headed by Saqib Shaikh, a Microsoft developer who lost his sight when he was seven years old.

“We think deeply about both people and institutions people build to outlast them,” says Nadella.

Even the HoloLens, he says, is having greater impact than being a nice device to have.

He says the mixed reality glasses are now being used by companies like Saab Defence, which can use it to pre-empt hazards and optimise their efforts in special force rescue missions.

“That really speaks to the opportunity in front of us.”

As more people become creators of technology, he says events like Hack for Good play a great role in shaping the type of world and society the next generation will live in.

And impact-driven ventures like Australian-founded Eyenaemia, who won Microsoft’s startup challenge Imagine Cup in 2014, are critical in ensuring people are not forgotten and can enjoy better lives.

Eyenaemia uses selfies to detect signs of anaemia early so people can be treated.

“They described themselves as doctors by day and developers by night,” he says.

“They’re now in clinical trials in Africa and in other emerging markets.”

StartupSmart attended this event as a guest of Microsoft.