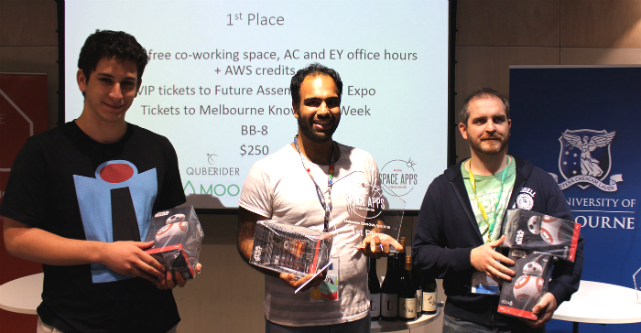 From holograms and jet packs to IKEA-inspired space goods, the Melbourne leg of the NASA Space Apps Challenge inspired a range of new intergalactic ideas.

“We even had a couple of astrophysicists and scientists.”

Combining coders, developers and engineers with creators, artists and storytellers, 16 teams formulated solutions for some of the world’s biggest challenges.

Melbourne teams went head to head working on a wide range of ideas for the chance to compete with NASA hackathon teams across the globe and attend a live rocket launch.

“What was really cool was seeing the different kinds of things that people were doing,” Mannering says.

The top prizewinner was Oh-Ree-Ga-Mee, an IKEA-inspired storage rack that can be folded to fit into tight spaces on a space station.

In addition to a mix of VIP tickets to upcoming events like Melbourne Knowledge Week, the team scored a 15-minute spot on a space experiment flight taking off this July.

Interface developer Steven De Salas and his team won the ‘Best Use of Data’ category.

“My idea was to create a wearable arm band device for astronauts and space travellers to alert them to potential hazards in space environments,” De Salas tells StartupSmart.

If one of them is threatened, an alarm and vibrations will trigger to alert the rest of team wearing the band so they can respond immediately to help their peer.

De Salas, who attends hackathons regularly, says the NASA Space Apps Melbourne challenge is one of the most fun he has attended.

But he says the type of ideas that were developed were also very strong, particularly the jet pack.

“It was pretty impressive,” he says.