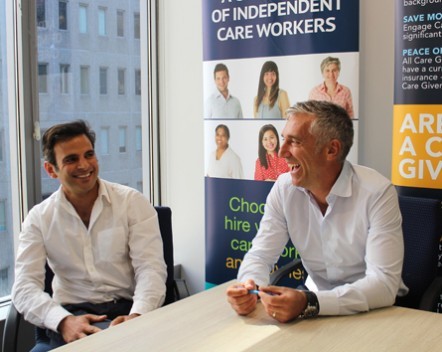 Peter Scutt’s startup journey started with a simple desire – he wanted to ensure his parents received the best possible care as they grew older.

Both parents adamantly wanted to stay in their own home, but Scutt found it difficult and expensive to organise care workers.

“We were struggling to provide adequate support so they could continue to live independently in their own community,” Scutt says.

“I had to deal with these problems, and my conclusion was that the industry didn’t work well for my parents or the care workers.”

He said it would typically cost $45-50 per hour, and his mother, who has dementia, lacked a social connection with the “revolving door” of carers, something which also frustrated his father.

“The situation with my parents made me realise that this industry was crying out for change,” he says.

So Scutt decided he would be that change.

“We thought that these marketplace solutions where we empower people and connect them directly would result in a much better outcome for both sides,” Scutt says.

“It was a vision for how the marketplace could operate better.”

The Sydney-based startup has just closed a $2.3 million series B investment round which Scutt says will be used to “aggressively” expand the platform nationally.

“We essentially spent a lot of time building the platform and getting engagement on the platform with care workers and consumers,” he says.

“Now we’re at a point where we feel we can grow the platform rapidly. We want to take a Sydney offering and make it a national offering.”

While he won’t reveal the valuation that the investment round was based on, Scutt does say he was “happy” with the price placed on his startup.

“I think it fairly represented the opportunity and significant first mover advantage we have,” he says.

“We talked to a targeted group of investors, and they were people we knew and thought the opportunity would resonate with them.”

He says this targeted pitching is the key to successfully closing an investment round.

“Entrepreneurs need to make sure they’re heavily aligned with their investors so they’re all working together towards building a successful company,” Scutt says.

Better Caring allows care workers to operate their own small businesses and connect directly with those needing care. It allows users to specifically pick which care worker they want.

There is a “rigorous” selection process to make sure all care workers listed on the site are safe and qualified, Scutt says, with only 350 of the 2000 applicants so far making it through to appear on the site.

It’s a much cheaper alternative to more traditional means of proving care, Scutt says, with prices ranging from $25 – 35 per hour, and workers setting their own prices.

As with all marketplaces, Better Caring’s success relies on being able to attract both sides of the equation to ensure the demand is met with adequate supply.

“We’ve been very encouraged by the take-up on both sides, particularly with the satisfaction care workers have gotten from running their own small business,” Scutt says.