Pollie techs: Coding bootcamp for politicians where kids do the teaching 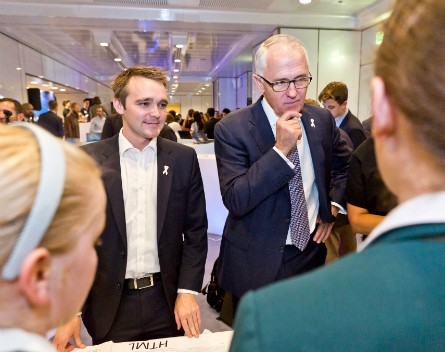 More than 40 MPs and Senators, including the Prime Minister, have attended a “coding bootcamp” in Parliament to get hands-on experience in how innovation is taught in schools and what can be achieved with new technologies.

Hosted by Intel and assistant minister for innovation Wyatt Roy, the training session featured demonstrations from five ACT students, including a robotic dog that uses ultrasonic sensors, an Internet of Things letterbox and a mobile app for finding ethical products.

It was all about showcasing what students can achieve through coding and educating the politicians about the technology, Intel corporate affairs manager Katie Ford says.

“It’s very useful to give them hands-on experience and allow them to see these great projects coming out of schools,” Ford tells StartupSmart.

“Coding and innovation are very hot topics at the moment, but we need to think about the skills we need for the future and how we can inspire the next generation of inventors, innovators and scientists.

“It’s focused around the premise that students need to move from just consuming, using and playing with technology to being creators, designers and inventors of technology.”

Opposition Leader Bill Shorten also attended the bootcamp, and Ford says it’s positive that both sides of politics are recognising the importance of STEM education.

“They’re extremely bipartisan in this area,” she says.

“Both the assistant minister and Bill Shorten made it very clear there’s no dispute over going down this path.

“The politicians were blown away by the inventiveness and creativity of the students, and it was really lovely to see students teaching politicians how to code and how to create their own inventions.”

There has been a lot of discussion in Canberra recently about the importance of STEM educations and encouraging the next generation of innovators and entrepreneurs.

Programming and digital literacy should be as “fundamental as reading and writing” in schools, Malcolm Turnbull has said, and a new digital technologies curriculum includes the teaching of coding from Year 5.

The opposition also recently announced plans for $4.5 million in grants for coding program and a $9 million national coding in schools centre.

State governments have also emphasised the importance of innovation education, with coding and robotics to be taught in all Queensland state schools from next year.

Ford says these skills provide the basis for future startups and economic prosperity.

“If we talk about Australian as an innovation economy, these are the skills that are at the foundation,” she says.