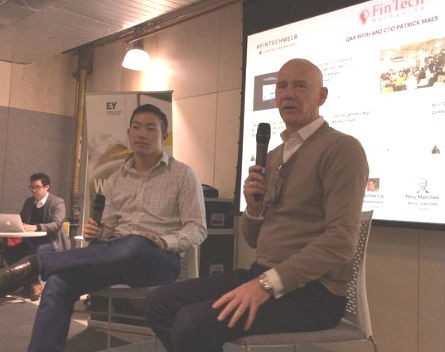 ANZ wants to build relationships with Australian fintech startups, so they can partner to solve global problems in the financial services industry, the bank’s chief technology officer Patrick Maes says.

And thanks to sponsorships with Sydney fintech co-working space Stone and Chalk and York Butter Factory, Maes says the bank is in the early stages of building those relationships.

Sure sponsorship is great, but what’s even more valuable is if Australia’s banks were more open to trialling and potentially using Australian startup’s products. Last year ANZ spent roughly $1.4 billion on technology – even a slither of that going to the Australian fintech industry would be hugely beneficial. Not in the form of venture capital, or corporate philanthropy, but cash for products/services. And that’s exactly what Maes wants to see more of.

“The relationship we have with York Butter Factory, or Stone and Chalk in Sydney, they give us the radar to look at what’s out there and with whom we can work,” he says.

“I have to say what we also expect those companies come to us and do a pitch. We don’t see it as something different to a relationship: we don’t care about your size; we care about your IP and your capability. It’s a commercial relationship – it must be a win-win for both sides.”

The approach advocated by Maes is different to competitors. NAB is going for a model of internal innovation through NAB Labs, while Westpac is making strategic investments through its Reinventure fund, taking equity positions in the likes of SocietyOne and more recently Coinbase.

Maes stresses his personal opinion is that banks shouldn’t be entering the venture capital space.

“The real value is in the connectivity of the people; not having equity in the company and hoping it will become a unicorn,” he says.

“We’re not in that business, we’re a bank. Not a big investment fund or VC. I’ve also noticed in the Valley there are now so-called specialised companies that are providing corporates venture fund set-up advice – what a pile of bullshit.

“If you’re really that good in VC, would you set a company to give advice? You could earn much more in doing it.

Of course, it’s one thing for Maes to stand in front of a Melbourne fintech meetup and talk about collaboration, like he did with considerable passion on Thursday night, and another thing entirely for the organisation more broadly to be open to pitches from early-stage startups.

Pin Payments founder Chris Dahl, who works closely with NAB and praised them for being a fantastic partner, says currently banks are more valuable as potential channels for customers.

“I haven’t seen a lot of evidence of banks in Australia truly integrating with startups, there is a lot of opportunity to do that, but it’s difficult because of the massive cultural differences,” he says.