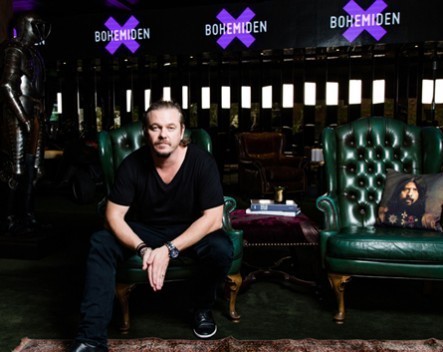 Australian entrepreneurs are too quick to “whinge” and lack the courage to have a go says one of the nation’s leading technology pioneers.

Few local entrepreneurs have as decorated a past as Ron Creevey, the businessman credited with helping to bring the internet to Australia when he was in his early 20s.

While he was a sales manager with Magna Data Creevey helped build the website for the Sydney Morning Herald, one of the first websites in the country. He went on to sell his first business NTT for more than $100 million.

Creevey is also the founder of social network platform YuuZoo, along with former Nokia executive Thomas Zilliacus. YuuZoo listed on the Singapore stock exchange in September 2014 and booked revenue of $US17.6 million ($23.8 million) for the first half of this year.

The Sydney-born entrepreneur has not been involved in YuuZoo for a number of years and now splits his time between his hometown, Singapore, New York and London.

But it’s Creevey’s latest business, Studio X in Sydney’s Kings Cross, which is currently taking up most of his time. It also represents a financial investment Down Under that Creevey hopes will support and encourage other local entrepreneurs.

Billed as a social broadcasting studio, Studio X has already secured partnerships with some of the world’s largest digital media companies, including Twitter, Amazon and Spotify. The studio, which opened last October with a special event attended by Australian singer Guy Sebastian, also doubles as a private live-music venue and includes multiple green rooms and bars.

Creevey is no stranger to the hospitality sector – his company The Cabinet became one of the largest catering companies in Sydney before it went under in 2005 with millions in debt.

Speaking to SmartCompany, Creevey says Studio X shares plenty of similarities with his other ventures, the most important being it is based on innovative technology.

The technology that makes Studio X’s social broadcasting possible is called XCast, a media-agnostic broadcasting platform that allows brands and users to create channels to broadcast either live television or radio content. The platform also allows users to stream the content or access it via video-on-demand or pay-per-view.

The studio space is available to anyone and everyone. Amazon records some of its audible.com audiobooks there, while Mark Bouris uses the space to record his podcasts. Channel Nine has interviewed artists in the studio, Aussie singer Johnny Ruffo used it to film his latest music video and Twitter launched his short film festival #Tropvine there.

“Everyone thinks the X stands for Kings Cross, but it stands for ‘your studio’,” Creevey says.

“In our first 12 months we’ve had every major media company use the studio.”

Last month singer Cody Simpson used the studio for one of his performances during his visit to Australia. Spotify and Audible both streamed the performance, which was also broadcast using XCast to television networks through music station Channel V. The event was then promoted across the television networks via more traditional advertising.

“We do it all together,” Creevey says.

“Spotify is like the head of the snake, the voice, and the body is the more sustained media. Collectively the big companies all fit together.”

Creevey says the launch of XCast and the X Studio is his strongest launch of a business to date but he says securing partnerships with the world’s largest tech firms is “pretty hard and “a difficult thing to do”. He says his long career in digital technology has held him in good stead when those firms check up on him.

“I’ve been involved in tech since the internet started – I built the website for the Sydney Morning Herald,” he says.

“So my network is pretty strong and I pull on what I need. Australia, in particular Sydney, deserves to bring a bit of sexiness to the table with a great venue.”

Creevey laments the fact that most big media firms only want to work with other big firms, pursuing deals only with the likes of big telcos Telstra, Optus and Vodaphone.

“This is such a narrow focus on the same big guys,” he says.

“You go to any of the big sellers of sports and they say they’ve got to work with Telstra or Optus. They need to think outside the square.”

“It’s easy to get intimidated but it’s a massive tick for me personally.”

Studio X now employs more than 100 casual and part-time staff and Creevey says his venture is the largest employer in Kings Cross. He plans to list the business in the UK by the end of the year and by the business’s first birthday in October, he expects to be turning over at least $1 million a month.

Despite his own success, or perhaps because of it, Creevey fears his home country is failing to keep up with international counterparts when it comes to fostering entrepreneurship.

And part of the problem is attitude, Creevey says.

“Australians find it very easy to sit around and whinge,” he says.

“In New York and London, they don’t whinge, they get on with it.”

“It’s why entrepreneurs are failing in Australia … they don’t have the courage to get off their ass and do it. This generation now all believe they are entitled but they have to come to grips with the facts.”

As someone who dropped out of school and has “never received a pay” in his working life, Creevey is disappointed with the small number of entrepreneurs in Australia and says ‘entrepreneur’ is “almost a dirty word” in Australia.

“I’ve taken three companies to over $100 million in revenue,” he says.

“I’ve had one failure but that failure created the next two businesses.”

“Years ago the government wouldn’t even listen to what I was saying,” Creevey says.

“The Prime Minister has asked me how I’m going. People are listening.”

But Creevey has one concrete suggestion for what can be done to assist the next generation of entrepreneurs.

“I think there is a massive call for a large incubator,” he says.

“Myself and [mentor] Bob Mansfield are massive advocates of this. He is one of the country’s best entrepreneurs, he founded Optus, his career is so decorated.”

“We equally believe there needs to be more infrastructure to support that, to provide entrepreneurs with the tools they need.”

“Governments should give them the desk, the computer, the opportunity to find a mentor and network with others.”

“But you can’t over-reward either or give them too much,” Creevey adds.

For Creevey, it’s about creating an environment that supports the “3% who will employ the other 97%”.

“Here’s your breaking point. There’s a young kid, 19 years old, who has grown up in Western Sydney and his family doesn’t have money to invest in his business. What’s the next step? The government can step in to make it a bit easier, or he can get paid [on welfare] to be a pot-smoking loser who surfs all day,” he says.

However, Creevey has doubts whether governments can develop long-term plans for encouraging the next generation of Australian business owners.

“The government is constantly always looking for votes and there’s not enough entrepreneurs to justify a change in government,” he says.

“They may find themselves spending a lot of money investing in people who are not helping themselves.”

“You need the hurt money”

“I relate to [Leonardo] Da Vinci. Everything connects. It’s something everyone should remember.”

And you need to be prepared for some financial pain, Creevey says. It’s this “hurt money” that Creevey wants other entrepreneurs to understand.

“You may never earn a million dollars on paper but you’ve created wealth and assets and more money for your shareholders.”

“You’re not going to earn much money for the first few years but if you believe enough in your vision and the product, the money will come.”