The Apollo 11 coder who got man on the moon: “To call her a trailblazer is an understatement” 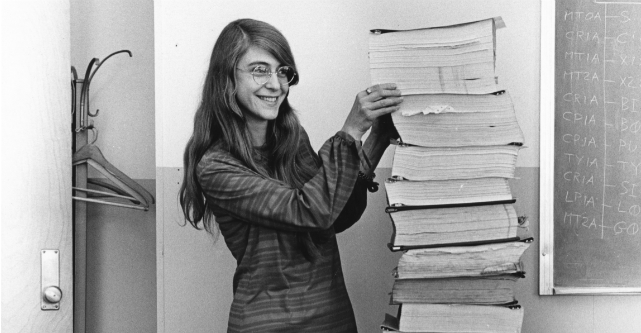 She is quite possibly the most influential scientist you’ve never heard of.

Margaret Hamilton, now 80, has been described as “the woman who sent man to the moon”, the inventor of modern software and the pioneer of “software engineering”.

To call her a trailblazer is an understatement.

As Wired put it: “As a working mother in the 1960s, Hamilton was unusual; but as a spaceship programmer, Hamilton was positively radical.”

She led a team at MIT that developed onboard flight software for the Apollo spacecraft that eventually landed humans on the moon in 1969.

the woman who helped code the software that got apollo 11 on the moon was awarded a medal of freedom🌙🚀 pic.twitter.com/dqIYz6Q2pi

Last week US president Barack Obama awarded Hamilton a Presidential Medal of Freedom, the highest civilian award in the United States, in recognition of her contribution to computer science.

“Keep in mind that at this time software engineering wasn’t even a field yet,” Obama said.

Instead Hamilton developed and wrote the textbooks – or code – herself.

As a 24-year old ‘programming’ beginner at MIT, with an undergraduate degree in mathematics, she began working on a program that could predict weather systems and track movements through simulators.

“What they used to do when you came into this organisation as a beginner, was to assign you this program which nobody was able to ever figure out or get to run,” Hamilton told a conference in 2001.

“When I was the beginner they gave it to me as well. And what had happened was it was tricky programming, and the person who wrote it took delight in the fact that all of his comments were in Greek and Latin.

“So I was assigned this program and I actually got it to work. It even printed out its answers in Latin and Greek.

“I was the first one to get it to work.”

That success helped make Hamilton a candidate to work on NASA’s Apollo space program from 1961.

Eventually she led the team that developed the in-flight software which was integral to the mission’s ultimate success.

It was a demanding and exhilarating project.

“From my own perspective, the software experience itself – designing it, developing it, evolving it, watching it perform and learning from it for future systems – was at least as exciting as the events surrounding the mission,” Hamilton described for MIT News in 2009.

“There was no second chance. We knew that.

“We took our work seriously, many of us beginning this journey while still in our 20s.

“Coming up with solutions and new ideas was an adventure. Dedication and commitment were a given.

“Mutual respect was across the board.

“Because software was a mystery, a black box, upper management gave us total freedom and trust. We had to find a way and we did.

“Looking back, we were the luckiest people in the world – there was no choice but to be pioneers.”

The software proved critical in Apollo 11, when three minutes from the moon, the computer alarms triggered.

As Hamilton explained in 1971:

“The computer (or rather the software in it) was smart enough to recognise that it was being asked to perform more tasks than it should be performing. It then sent out an alarm, which meant to the astronaut, I’m overloaded with more tasks than I should be doing at this time and I’m going to keep only the more important tasks: I.e., the ones needed for landing… Actually, the computer was programmed to do more than recognise error conditions. A complete set of recovery programs was incorporated into the software. The software’s action, in this case, was to eliminate lower priority tasks and re-establish the more important ones… If the computer hadn’t recognised this problem and taken recovery action, I doubt if Apollo 11 would have been the successful moon landing it was.”

It’s true that a man made it to the moon, but without Margaret Hamilton it might not have been possible.

That’s a footnote to history that ought to be remembered.

An opinion does not deal with the idea of right and wrong, correct or incorrect; rather, it deals with people’s reasons for thinking that way and how they came to their conclusions. Hence, the name: personal opinion essay. useful link.

When medical researchers publish their work on the internet, they usually will translate it into several languages as their main goal is to share the information efficiently. Quite often, when looking for specific medical information on the Internet.useful link