The eight latest and greatest Internet of Things gadgets 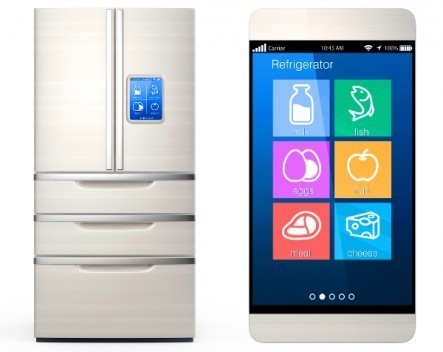 Too lazy to flick a switch, want a drone to follow your kids on the soccer field or connect your fridge magnet to the cloud?

Paul Wallbank visited the recent Internet of Things World forum in San Francisco and reports for SmartCompany on the latest and greatest connected gadgets.

Read more: What is the Internet of Things and what does it mean for your business?

Wiring up remote controlled switches is expensive, time consuming and often impossible for businesses and families renting their building.

Ashish Dua, the co-founder of Switchmate, says the product is about making connecting your light switches simple. “It’s about getting the luxury and convenience of home automation without complex installation.”

Founded by three engineers from John Hopkins University, the company has been running for 18 months and tripled its original $50,000 crowdfunding target for the project on Indiegogo in April this year.

Another successful crowdfunding startup is French company Giroptic’s 360 Cam, which records video in 2k resolution and takes 4k still images. “It was a really simple idea, we just believed it should be possible to capture images exactly how they happen,” the chief operating officer for Giroptic, Marian Le Calvez, says.

The 360 Cam has a detachable base that allows different applications for the camera, including a light bulb socket adapter that allows the camera to be mounted in and draw its power from a light fitting, and another fits into a networked connected base for security applications.

3. Smartlights with a difference

There’s been no shortage of IoT enabled lights appearing on the market but Sengled puts a new twist on the idea with embedded speakers, Wi-Fi base stations and video cameras built into their LED devices.

4. A drone that follows you

Probably the sexiest device at the show was the Hexo+, a drone mounted video camera that follows you and gives you “Hollywood” style action shots.

“Hexo+ is a completely autonomous self-flying camera that is controlled by a smartphone app where you select however you want the drone to capture you in action,” says the company’s product manager, Eva Pagneux.

Hexo+ was founded by Xavier de Le Rue, a French professional snowboarder who wanted to get shots of his manoeuvres but couldn’t afford a crew or a helicopter to do so. Another successful crowdfunding project, the product blasted through its $50,000 Kickstarter target and eventually raised $1.3 million.

The preprogrammed flight patterns represent the most common camera sequences optimised for the GoPro camera. “If you’re on your own and you want to capture the amazing moments you are going through, you just pull out your Hexo+ select how you want to be filmed and off you go,” says Pagneux.

Wallflower is a device that fits onto stoves and alerts users through a smartphone app if they’ve left the stove on. The product was born 18 months ago when the company’s founder, Victor Jablokov, had to race home from a party to check if his partner had left the stove on.

“Thankfully, there was no disaster,” Iain McDonald, the startup’s vice president of hardware recounts. “But his wife asked ‘why is there not something I can shut the stove off with my phone?’ Victor tried to buy something that could do this but there was nothing he could find, so he set out to build one.”

Wallflower fits on most existing gas and electric stoves and is expected on the US market later this year.

6. The internet of fridge magnets

Hiku is a fridge magnet with a built-in barcode scanner that automates your shopping list. When you’re running low on something, you can scan the barcode and Hiku will send the details to an online shopping list that syncs with your smartphone.

The company recently announced a partnership with French supermarket chain Auchan as a home shopping device and the device is being trialled in Australia by Coles.

“This is a kit to make your shoes smart,” says Nate Shortsleeve, chief engineer at REFLX Labs, about the company’s Boogio sensor pack that slips into shoes to monitor what your feet are doing.

“We’ve combined the motion sensor data with magnetometer, gyroscope and accelerometer to give a full array of the forces and motions happening inside the shoe,” Shortsleeve says. “You have a genuine activity tracker.”

Shortsleeve points out that having sensors on the feet allows more accurate tracking and sees Boogio’s initial markets in the healthcare sector and the video game industry.

8. A breed of new devices

Driving the Boogio and many of the other devices was the new breed of miniature computers such as Samsung Artik that was launched by the company’s president, Young Sohn, at the show.

The Artik 10 and 5 are designed for smartphones and for hubs with larger memory and multiple communications protocols, while the Artik 1 is aimed at wearable devices such as the Boogio.

“On our boards we were getting at best a day’s battery life,” says REFLX Labs’ Shortsleeve of the Boogie device. “With the Artik one you can now go a week without charging your shoes.”

So the internet of shoes, and of other things, is being driven by a new breed of low power computer systems. With computing power becoming cheaper and more frugal, we can expect to see a lot more smart devices coming on the market.