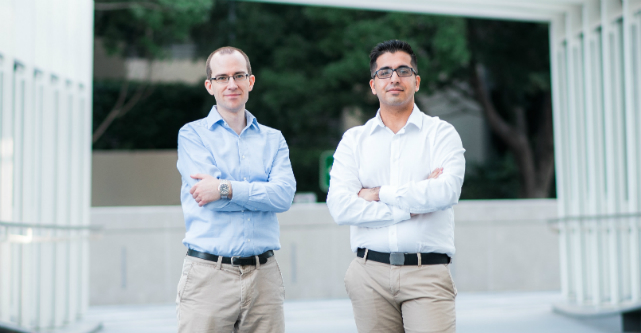 AJ Awan and Reuben Schwarz, the founders of Judo Chop, have launched a new smartphone app, Idea Kick, to help users execute on their ideas.

“We think Idea Kick is that gateway drug into the startup world,” Awan tells StartupSmart.

With many traditional jobs on the brink of extinction, Awan says more and more people should be thinking like startups to stay ahead and survive in this transformative age.

After being approached by many people with ideas but no idea how to execute on them, Awan and Schwarz created Idea Kick to help.

“We’ve built a simple methodology and we’ve distilled them down to three core things,” Awan says.

The app helps users develop new business models by exploring what exactly they want to deliver as a product or service to a customer, defining what the value may be and figuring out how they will make money from it.

In addition to developing new business ideas, the app helps users identify revenue streams whether that’s advertising, usage charges or a subscription model, and delivery methods such as couriers or even drones.

Idea Kick then gives users action steps to start getting their idea up and running in the real world.

The entrepreneurs have developed about 50 “next steps” based on their own expertise and research of what successful startups have done.

“We distilled that knowledge and put that into something that’s easy and bite sized,” Awan says.

The app also has a feature that takes a user’s idea and feeds back a random business model.

Awan’s friend tried this and came up with a burger beach delivery service for surfers.

“A service where surfers can order burgers and they can have the burgers delivered on a beach towel,” he says.

Apart from quirky ideas, Judo Chop is already sharing venture concepts from the app in blogs on how to disrupt industries like aviation and charities.

With the growing popularity of hackathons in mainstream society, Awan says there is great opportunity for their app to be employed at events like these and the thousands of startup thinkers that attend.

“All these people could be using something like Idea Kick,” he says.

Idea Kick is free to use, with a premium upgrade option released recently for $1.49.

Since then, it has had more than 100 downloads and while Awan hopes it will be downloaded as many as 15,000 times by the end of the year, he says his main goal is to inspire users to follow through with their new and exciting ventures, and become change-makers in their own right.

“What I really care about is that people actually take this and it gets used for something,” he says.