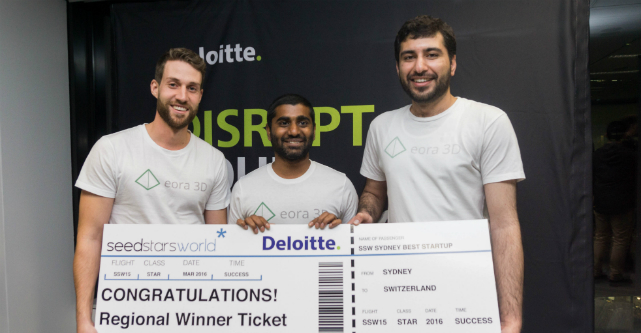 Three Australian startups have been recognised as some of the most disruptive companies in the world with the potential to “influence, change or create new global markets”.

Twice a year, leading entrepreneurs, investors and experts from the likes of Microsoft Ventures, Silicon Valley Bank, Sky News and IBM curate the Disrupt 100 list, which is published by UK-based Tallt Ventures.

Out of more than one million global startups and corporate ventures, Sydney’s Eora 3D, Adelaide’s Humanihut and Queensland’s GO1 made the cut.

With Asia expected to represent a growing number of listings in the future, Disrupt 100 has highlighted Eora 3D among the many startups in the region leading the way.

It’s a proud moment for Eora 3D co-founder Rich Boers who says he can’t believe his startup has been listed ahead of companies like IBM Watson, a health platform using artificial intelligence to generate insights on unstructured data.

“There are some incredible companies that have been featured,” Boers tells StartupSmart.

The listing comes as yet another point of validation for the fast growing startup, which recently celebrated $1 million in sales revenue.

The milestone follows an impressive crowdfunding campaign that saw Eora 3D triple its target at more than $300,000 within two days of its official launch.

While they began with the primary goal of providing an affordable way for individual consumers to use their mobiles for 3D printing, Boers says they have attracted a surprising level of interest from bigger companies.

“We were completely consumer focused, now we’re chasing enterprise as well,” he says.

Boers says they are aiming to commence trials at 10 enterprise companies across the aviation, mining, medical and forensics industries by the end of this year.

“It’s producing the quality that we can,” he says.

“We’ve looked at 3D scanning in a different way.”

“The Humanihut is the only all-in-one, out-of-the-box emergency shelter system of its kind in the world that provides accommodation, toilet and showering facilities, and integrates necessary services such as fresh water, sewerage disposal and power,” Sutton says.

The pop-up shelter system was designed to provide emergency accommodation during natural disasters and for refugees.

“It is a cost effective, innovative solution that has the potential to save international aid agencies millions of dollars,” he says.

“By providing clean water and shelter, the Humanihut helps prevent health problems such as malaria and water-borne diseases that kill thousands of refugees every year.”

The software startup, which has attracted more than $1 million in investment led by Shark Tank judge Steve Baxter and Tank Stream Ventures, is working with Oxford University to advance market reach across the UK and Australia.

“The Disrupt 100 champions those businesses who are rethinking today’s products, services, technologies and business models to open new markets and create new demand,” he says.