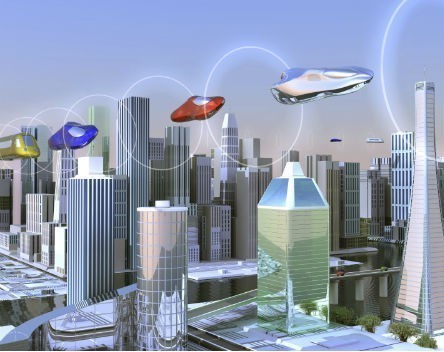 Flying cars in The Jetsons and Back to the Future, or Star Trek’s spaceships and teleportation, may have captured the imagination decades ago, but most current methods of transport have been around a long time. Railways were being rolled out rapidly from the 1830s, while the commercial breakthroughs in petrol and diesel engines date to 1876 and 1892 respectively. Even the jet engine that made mass aviation possible can be traced back to Frank Whittle’s first patent in 1932.

Despite decades of futuristic predictions, modern transport wouldn’t look all that different to someone from the 1950s – certainly not compared to communications or entertainment. So why has there been so little recent innovation in transport? And will the latest batch of proposed driverless cars, levitating trains and electric aircraft actually make a serious breakthrough?

In part, there hasn’t been a revolution because existing technologies have been able to evolve. Engines have become more efficient, fuel is higher quality, we have lighter materials, more aerodynamic designs and better brakes that mean vehicles can operate safely closer together. However, eventually there will be a limit to these evolutions.

In any event, transport is not just about technology. It is also about people – and people don’t always like change. We may be locked in to current technology, partly due to habit but also due to economics.

We have an extensive transport refuelling system based on petrol and diesel. To convert to electricity or, more fancifully, to hydrogen, will involve substantial re-tooling that will be difficult to finance. In the UK, drivers are used to manual transmissions and may be reluctant to learn how to use more automated systems, just as we would be reluctant to retrain to use a different keyboard even if it were more efficient. We are stuck with what we have – the economics of QWERTY.

Human factors may lead to unintended consequences – one of the ironies of automation is that it can lead to less attention to related tasks. For example adaptive cruise control can make car drivers less aware of hazards.

Even with full automation, when we still have trouble making all trains driverless, one might suggest driverless cars are a flight of fancy. Innovative aeroplane designs, such as the blended wing, are stymied by the human requirements for a window seat (NASA has suggested windows could be replaced with real-time video).

Fancy new inventions have to be accompanied by a business model and the right infrastructure, or else they’ll just languish as prototypes like the pneumatic transit system demonstrated in New York City in the early 1870s and a forerunner to Elon Musk’s proposed Hyperloop. Take flying cars. Even supposing the technology works, where would they land?

Such a system would only succeed if infrastructure – air traffic control, landing space and so on – was set aside. While flying cars could technically operate from airport to airport, what’s the point? Until there are sufficient numbers to set aside pieces of land or roads for takeoff we won’t achieve any of the benefits. And there won’t be sufficient demand until this land is set aside. Catch 22.

Trapped in the niche

When looking at how technology interacts with wider society it’s helpful to think in terms of three different levels: niches, regimes and landscapes.

In transport, there are plenty of niche innovations – battery electric vehicles, hydrogen fuel cells, car clubs – but few become mainstream. An exception might be hybrid electric vehicles such the Toyota Prius, but even here the underlying technology may be traced back to a patent registered in 1898 (by Ferdinand Porsche, no less).

The problem isn’t coming up with new ideas – it’s changing the bigger picture. At regime level, new transport technologies have faced resistance from vested interests such as oil producers and car makers. And the wider landscape has not always favoured major innovations – especially low oil prices.

With lots of different individual suppliers, transport is also vulnerable to tragedy of the commons-type outcomes and clashes between rival designs and brands. Navigation technologies can only be sold commercially if they benefit the individual consumer. However, if we all have access to such technologies, we can be collectively worse off due to congestion – for the greater good, it would be beneficial if sometimes our SatNav sends us on a longer route, but who is knowingly going to buy something like that?

Electric battery technology might have more rapid adoption if the technology was standardised, permitting automated battery swaps. But standardised to whose technology? Magnetic levitation train adoption is limited by the fact they can’t run on traditional rail lines and have only limited overlap with other maglevs.

In short, despite the fuss over disruptive technologies such as Uber, it is unlikely that transport will have a technology paradigm shift until there is a major landscape change. Of course, with volatile oil prices, limited reserves and sensitive geopolitics, such a change could be just round the corner. But for the moment the technology push does not seem to be complemented by a societal pull – people might like to watch sci-fi, but they aren’t yet ready to live it.