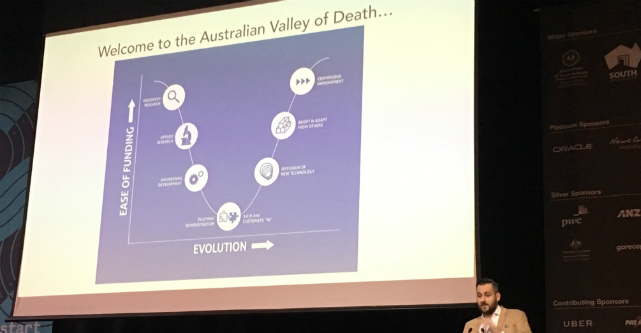 But this didn’t mean the world wasn’t.

Speaking at the SouthStart conference in Adelaide, Eldic said that building good quality products and companies for Australia isn’t good enough, and founders need to start thinking global from day one.

“You need to start understanding where your spot is in the global space,” Eldic says.

Avoiding the Valley of Death

When Bluedot Innovation was embarking on global launch, Eldic says he needed more than $1.5 million to make it happen.

But when the startup entered the Australian investor market, the team soon found themselves at the bottom of the “Australian Valley of Death”, a point when a failure to acquire customers for a research and development concept stunted funding and further evolution.

As a startup with dwindling finances and no customers, but with a tech product they knew would have demand in global markets, Eldic and his team decided to reach out overseas.

Today, Bluedot Innovation has staff and investors in two continents, customers in four and direct competitors across the globe.

To fellow founders with startups that offer something the world will want, Eldic says they should skip trying to dominate Australia as a stepping stone and head global from day one.

He says they need to consider opportunity, necessity and risk.

“Uber didn’t start thinking how do we change California,” he says.

“They said how do we change the world.”

It’s an ambition more Australian startups should begin with, he says.

“Going global from day one gives you a fighting chance to make you globally competitive,” Eldic says.

Bluedot’s journey in being a global startup has come with many challenges but Eldic says it has made the entire team stronger.

“When you go global you have to understand that there are global competitors, but don’t be afraid of that, it sharpens you up, and if you stick your head in the sand those competitors will be at your door and they will crush you,” he says.

Eldic says the support available for globally thinking startups in Australia is the envy of entrepreneurs in the US.

“They can’t believe the kind of support that is available here,” he says.

With government funding programs like Accelerating Commercialisation and the R&D grant, Eldic says Australian startups have excellent support to help them succeed on the international stage.

“There’s free money there just if you say, ‘I’m going to make a global startup’,” he says.

Reflecting this sentiment, the South Australian government announced a new six-month program helping local startups to accelerate their ventures, kicking off in August.

“If we are to grow, innovate and embrace the opportunities of today, we need to identify new ideas, exploit new products and target new markets,” Hildyard says.

“We want to improve the way we support startups.

“Sometimes we get dazzled by the big names and big brands and we need to remember even the biggest companies started small.

“By working together and connecting at events like this and beyond we can foster economic prosperity.”

StartupSmart attended the SouthStart conference as a guest of Brand South Australia.