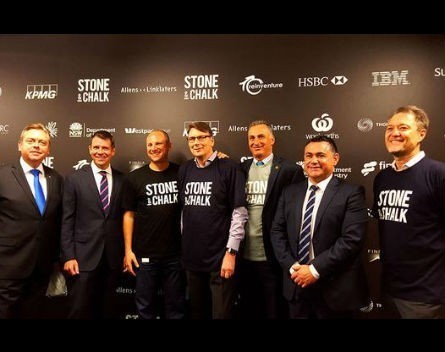 Fintech co-working space Stone & Chalk has finally announced the 41 initial startups that will be housed in the Sydney hub, three months after it first planned to open.

At a launch on Tuesday night, the building on Bridge Street was officially opened by NSW minister for industry resources and energy Anthony Roberts.

Stone & Chalk was first announced in March and planned to be open by May, but this date was pushed back as a new venue was found to cater for the “overwhelming demand”.

CEO Alex Scandurra says over 150 startups applied and about 200 people will be working in Stone & Chalk by the end of the year.

“From the outset our aim has been to attract the highest quality fintech startups in Australia, co-locate them under one roof, and support fast tracking their growth to ultimately help them go global,” Scandurra says.

Another international player to be using Stone & Chalk as its base will be online lending startup SpotCap, with Australia managing director Lachlan Heussler saying this will allow the service to expand across the country.

“Having our Sydney office based out of Stone & Chalk will allow us to interact with some of the most innovative new fintech businesses in Australia as well as get increased access to various corporate partners who can help us to grow our Australian operations,” Heussler says.

The other startups encompass a wide range of industries including superannuation, data analytics, consumer technologies and digital currencies.

Most are already based in Sydney, with a handful coming from other Australian cities.

Along with Ripple Labs and SpotCap, the only other international player seems to be New Zealand equity crowdfunding platform My Angel Investment.

H2 Ventures will also be housing its accelerator program in the co-working space, where it hopes to launch 100 fintech startups over the next three years.

Stone & Chalk chair Craig Dunn says Sydney can be a global player in the fintech market.

“Together, we are co-creating the future of financial services in Australia,” Dunn says.